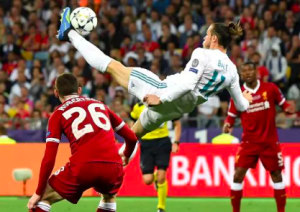 Real Madrid's Gareth Bale scored one of the greatest goals ever in the Champions League final this year.

Optus has secured Australian broadcast and transmission rights to Europe’s premier football competition, the UEFA Champions League, for the next three years.

The rights were previously held in Australia by BeIN Sport, with some games simulcast on SBS. BeIN Sports allowed Foxtel subscribers to watch the games.

Optus Sports will now show all games of the UEFA Champions League, the Europa League and the UEFA Super Cup, with some matches to continue being broadcast on SBS.

Fans will need to sign up to the Optus Sports app to watch matches. This may make some fans apprehensive after a disastrous World Cup where Optus agreed to let SBS show all of the tournament on free to air because of ongoing technical glitches.

It now holds the rights to the English Premier League and UEFA Champions League, while BeIN Sports continues to broadcast the other top European leagues in Spain’s La Liga, Italy’s Serie A and the German Bundesliga.

Optus’ deal with UEFA also includes Euro 2020 – the second biggest global football competition after the World Cup, the UEFA Nations League and European qualifiers for the Euros and World Cup.

Optus also has the rights to the 2019 Women’s World Cup in France, where the Australian Matildas are among the tournament favourites.

“This is an incredibly exciting time for Optus as we continue to build upon our strategy of delivering elite international football and exclusive content for customers,” Optus managing director marketing and Product Ben White said.

“Adding these tournaments and elite football matches to Optus Sport provides our customers with more than double the live premium football content compared to this time last year.”

UEFA director of marketing Guy-Laurent Epstein added, “We are excited to partner with Optus in the territory of Australia.

“Optus has proven its dedication to football in recent years, acquiring a considerable portfolio of premium footballing content.

“We look forward to seeing the way in which Optus builds the UEFA club competition brands in the territory and makes the competitions available for fans in Australia.”