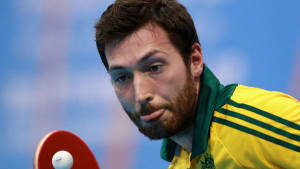 The AdNews Media Summit doesn’t only have sessions on programmatic and earned ecosystems, there will also by an Olympic ping-pong champion at the event, courtesy of Advvy.

David Powell, Australia’s first Olympic table tennis qualifier and highest-ranking Australian on the World Table Tennis Ranking List, will be challenging adland at the Media Summit, with every player who takes him on going into a draw to win a ping-pong table.

Advvy co-founder Tristan Ozinga says: “Advvy is calling on all the office ping-pong champions in the media industry. You know who they are, there’s one in every office that claims they are the best. Well, they may have everyone in their office beat, but how good are they really against one of Australia’s best?"

Advvy is giving your agency or media organisation the chance to take home a table in celebration of its new universal briefing system; a platform designed to help media agencies create new ways for buyers and sellers to communicate with each other.

The system, called Advvy Unibrief, aims give adland people more time to do what they want… Play ping-pong.

Have you got your tickets to the Media Summit yet? Don’t miss out on your chance to play the pong champion, and here from keynote speakers including Dr Karen Nelson-Field.