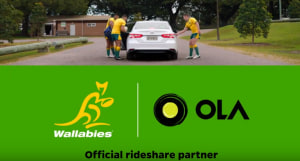 The sponsorship names Ola as the team’s official rideshare partner ahead of the Wallabies’ journey to Japan for the Rugby World Cup in September.

The ads feature Wallabies players Nick Phipps, Folau Fainga’a and Bernard Foley, focusing on the lead-up to September and highlighting the "seamless experience" of riding with Ola.

The objective of the campaign is to elevate the partnership and amplify Ola as the Wallabies’ official rideshare partner.

“We’re thrilled to announce our partnership with the Wallabies and to continue providing convenient, reliable transport to our customers, helping fans get to venues and home again safely, as they enjoy getting involved in this major upcoming international sporting event,' Recently appointed OLA ANZ CMO Andrew Balint says.

This is the second campaign to be created by Advertising Advantage (AdAd), a full-service operation which runs performance billed campaigns where up to 100% of the agency's payment is tied directly to performance.

Ola continues to use AdAd, despite previously confirming to AdNews late last year that it had entered into creative and media partnerships with Clemenger Sydney and Wavemaker, respectively.

The latest ads also aim to show fans the variety of offers and extra value they can access with Ola, positioning the brand as the "better value rideshare option", similar to the position of its first major campaign which launched in April.

Two executions were developed with the help of the Wallabies team members, each featuring the players waiting for an Ola like every day customers.

The spots will begin rolling out across Australian screens this week on digital platforms including YouTube, Facebook and Instagram, followed by free to air and subscription TV in September.

"This is a magic partnership. The Wallabies are our favourite team and Ola want to be the nation’s favourite rideshare - two highly competitive brands working together with a burning desire to be the best," Advertising Advantage group account director Tracey Gabriel says.

"The spots showcase the value of the Ola offering with fun executions that capitalise on the love that rugby fans have for their national team.”

The partnership will leverage the value of the Wallabies’ brand during the World Cup year to build brand equity for Ola, drive new customer acquisition and showcase the company’s ongoing commitment to providing a better alternative rideshare platform for both riders and drivers.