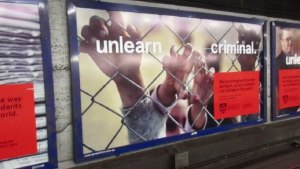 The Advertising Standards Bureau (ASB) has upheld a complaint of racism against a University of Sydney billboard that gave the “overall impression that non-Caucasian people are criminals”.

The ad, created by The Monkeys, featured children’s hands gripping a wire fence and the words “unlearn criminal”.

The spot is part of a wider outdoor push from University of Sydney to encourage students to explore its 2018 curriculum.

The complaint to the ASB said the ad breached the section of the advertising code of ethics relating to discrimination or vilification on the basis of race, ethnicity or nationality.

“This is offensive particularly given the over representation of Aboriginal and Torres Strait Islander women in our prison system,” the complainant said.

“These women make up around 34% of the female prison population but only two% of the adult female population."

In response, the University of Sydney said the image was intended to provoke thought regarding the way society treats children in detention and argued it is not racist.

However, the ASB ruled in favour of the complainant and as a result the ad has to be removed or altered.

“The board considered that the word ‘criminal’ is very prominent - even though it is struck through - and is likely to be the word that catches the eye of the reader in the first instance, and that this word and the image of dark-skinned hands behind a fence are the most impactful parts of the advertisement,” the ASB said.

“The board considered that the depiction of solely non-Caucasian young people in the image, accompanied by the prominent word ‘criminal’, is a depiction that gives less favourable treatment to people on account of their ethnicity or race.”

The University of Sydney said the billboard has already been removed as the campaign period has come to an end.