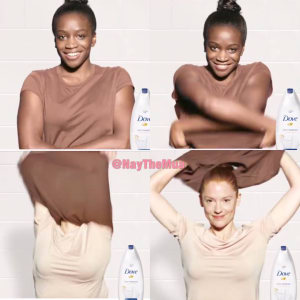 Dove has been forced to apologise after releasing a series of images in a Facebook advert that showed a black woman turning white.

The Unilever-owned company was called out for being accused of being “racist”. said it “deeply regret(s)” the offence caused, admitting the images “missed the mark”.

The American advert shows a series of photographs in which a black woman pulls off her T-shirt to reveal a white woman underneath.

Another image shows the white woman undressing to reveal an Asian woman.

The advert has sparked debate on social media, with some saying the advert implies darker skin is “dirty”. People have threatened to boycott the brand.

It's unclear which agency created the ad. Ogilvy & Mather handles much of the brand's creative work, but Unilever also has moved considerable work, particularly for quick-turnaround digital ads, in-house.

Earlier this year, Nivea released an ad which featured the tagline 'White is Purity' for its deodorant product. It received similar backlash, with many accusing the brand of associating white with cleanliness.

It is not the first time Dove has come under fire for the way its adverts depict women of colour.

In 2011, it was accused of racism after a black woman was pictured stood by the “before” image in an advert and the white woman was by the “after”, with another woman, standing between the pair.

Dove was also criticised in July over its ad campaign that questioned if mothers should breastfeed in public.

Dove has long set out its stall as being the brand for 'real beauty' and is held in high regard for ts positive marketing messages. Unilever too, aims to be a responsible marketer, and launched an initiative last year to target stereotyping in its ads and improve the depiction of women in communications.