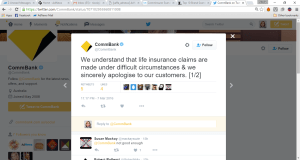 It’s up there with recent brand disasters by Vodafone Australia, FIFA and VW. Last year there was the financial advice scandal, now this.

A joint investigation between BusinessDay's Adele Ferguson and ABC's Four Corners this week, revealed doctors at CommBank/CommInsure were encouraged to change their assessments of customers’ illnesses to avoid payouts, delayed payouts to terminally ill customers and refused to honour claims to former staff who were medically retired.

The bank's CEO Ian Narev appeared on Four Corners to front up to the allegations and, prior to the show airing, the bank offered settlements to Evan Pashalis and Helen Polydoropoulos - both affected by shoddy insurance practices that robbed them of compensation at desperate times of need.

Since the show aired, CommBank/CommInsure’s public statements and remedies have included a media statement (quoted below), plus a tweet (directly below) and a quiet Facebook page - noticeable for its lack of anything on the subject.

Narev says: “We are deeply committed to being an ethical business. We will do our utmost to maintain the highest standards and avoid mistakes. But as we have said before, being ethical does not mean being perfect. So an important part of being ethical is responding the right way to mistakes. If we do make a mistake, we will apologise and put it right.”

The investigation and the subsequent response online could not be more damaging for the brand. Famous human rights lawyer Julian Burnside tweeted: "Teaching them ethics is like explaining the colour blue to a blind person".

As everyone now knows, it does not take much to damage a brand in today’s world of powerful social media tools.

Robert (Роберт) ‏@RobertIdAu: "The only thing @CommBank is sorry about, is getting caught. It had plenty of opportunity to remedy its fraud, instead sacked whistleblower."