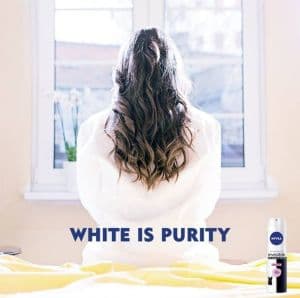 It has not been a great week for diversity in advertising, with Nivea now under fire for a “racially insensitive” ad that comes only a day after Pepsi had to pull its ad after social media backlash.

The Nivea spot, that has now been removed, featured the tagline “white is purity”, alongside an image of a woman with dark hair sitting in a white robe.

It is advertising the skincare brands’ “invisible” antiperspirant.

The brand has since said it was only intended to be posted to its "Nivea Middle East" page.

"The Nivea Middle East advertisement was not meant to be racially insensitive. We sincerely apologise. The post has been removed. Diversity, tolerance and equal opportunity are fundamental values of Nivea.”

This isn’t the first time Nivea has come under fire for its advertising. In 2011 the brand was criticised for depicting a black man whipping off his afro and “re-civilising” himself.

Many are taking to Twitter to question the diversity within the internal teams of both Pepsi and Nivea.

That NIVEA ad campaign is so fucking racist. This is why you need Black people involved in the decision making because this is ridiculous.