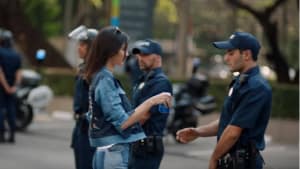 The ad has been labelled "tone deaf, shallow and over-produced"

Pepsi’s latest ad campaign has been met with immediate backlash on social media with some people labelling it the worst ad they’ve ever seen. It's in hot water over insensitivities around protest movements and police brutality.

The ad shows a blonde Kendall Jenner posing for a photoshoot when she notices a passing protest. One musician gives her a knowing nod, and with that, Jenner walks off her modelling job, ripping off her blonde wig and shoving it in the face of the woman running the photoshoot.

Next the model is in the thick of the ‘protest’, where gay, black, Muslim and transgender people mingle happily as a line of policemen look on.

Jenner breaks out of the crowd to approach an officer, with an ice-cold Pepsi in her hand. She passes it to him, he takes a sip and smiles as the crowd celebrates.

People aren’t happy the ad suggests the ongoing and public outrage over US police brutality could be solved by enjoying a can of Pepsi.

The scene where Jenner hands the police officer a Pepsi has been likened to the iconic photo of Black Lives Matter protester Ieshia Evans being arrested.

For decades, Coca-Cola associated its brand with the slogan 'Open Happiness' and launched a slew of campaigns and activations centred around inclusivity and diversity. It recently changed its approach and resigned the slogan in favour of "Taste the Feeling'. At the time, then CMO Marcos de Quintos, said the brand had forgotten that it was a soft drink brand and that it shouldn't always be playing in political/lofty matters.

It seems now Pepsi is trying to make the same play, however the sensitivity of the political climate in the US and globally has heightened, following the election of Donald Trump.