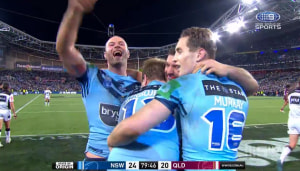 Nine's coverage of State of Origin game three has drawn just over two million metro viewers overnight, up more than 200,000 viewers on 2018's final match for the series.

The total national viewership for the game was 2.88m, which included a further 879,000 regional viewers, with the national average also improving by close to 200,000 viewers.

Last night's decider was up on game two, which drew 1.96m overnight metro viewers but down on game one which had 2.17m. Both game one and two had totals of 3.2m and 2.8m national viewers, respectively when taking regional into account.

“The 2019 Origin series has had it all, culminating in last night’s decider. For Nine, it has been fantastic to work with our sponsors, Sony Pictures, Sportsbet, Holden, Stan, McDonalds, Telstra and Harvey Norman," Nine director of sales - sport Matt Granger says.

"Nine’s exclusive broadcast of Origin has once again showcased it’s unique position and dominance for audiences and partners alike.”

Nine would have been anticipating a ratings improvement from last year's game three, as NSW took the series within the first two games, leaving 2018 without a final game decider. This generally sees a slump in ratings.

However, last year's game three shed 700,000 viewers compared to 2017's Origin decider, with Nine recovering just under a third of that audience in 2019.

This year, the rivalry between NSW and Queensland went right down to the wire, with the two sides meeting at ANZ Sydney for the decider clash.

In what were a nail-biting 80 minutes, NSW stole the series with a last-ditch effort, which saw Blues fullback James Tedesco crash over the line in the final minute with a game-winning try.

The Blues beat the Maroons 26-20, with teams going try-for-try in the first half, entering the sheds 8-8 at the end of the first 40 minutes.

The second half saw NSW come out firing, notching up 12 points on Queensland before the Maroons came back with a quick succession of tries to even the game out at 20-20, which was then followed by the last-minute Blues try.

“There is no other sporting contest like State of Origin anywhere in the world - professional footballers leaving their club to play for their state of origin in what is the equivalent of three consecutive Grand Finals," Nine director of sport Tom Malone says.

"It delivers again and again because of the passion and pride across cities, towns and states – and because of the incredible athleticism of the players.”

Nine's pre-game and post-game coverage of the night drew in 1.105m and 651,000 overnight metro viewers, respectively.

The network dominated the ratings for the evening, as Seven's Border Security drew 409,000 metro viewers, while Ten's MasterChef drew 555,000 viewers in the primetime slot.