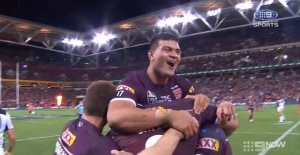 The clash between NSW and Queensland was the highest viewed show of the night, as Maroons held onto victory, taking out game one 18-14.

Despite a strong first half from the Blues, which saw them enter the sheds 8-0, Queensland came out firing in the second half, battering the NSW side and notching up 18 points.

Regionally, the opening clash of the three game series drew in a further 1.02m viewers, with a combined overnight viewership of 3.2m.

The game was only slightly down when compared to 2018's first match, which drew 2.34m overnight metro viewers.

Nine's pre-game and post-game coverage were the second and third highest rated non-news programs for the night, with 1.18m and 908,000 metro viewers tuning in respectively.

The network dominated the ratings, with Seven's House Rules drawing in 532,000 metro viewers, while Ten's Masterchef drew in 531,000.