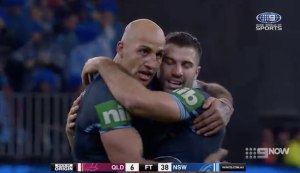 State of Origin game two was unable to secure over two million overnight metro viewers, as NSW bounced back from its game one defeat.

The second game of the three-game series drew in 1.96m overnight viewers, with NSW defeating Queensland in a massive 38-6 upset in Perth.

Game two was the second year in a row that Nine had aired Origin on a Sunday, following the network's return to the strategy in 2018.

Despite dominating the major demos and overall programming for the evening, the game still shed over 100,000 viewers. The game was also down over 200,000 viewers compared to game one of the 2019 series.

Regionally, the game drew in a further 840,000 viewers, taking its total national audience to 2.8m.

Game two was also the highest rated Origin of all time in Perth, drawing in 167,000 viewers in the West Australian capital.

The pre and post-game shows also drew in 1.16 and 814,000 overnight metro viewers, respectively.

The two teams will now meet for the series decider in Sydney on 10 July. Nine will be hoping for a stronger ratings performance as the two states battle it out for the Origin shield.