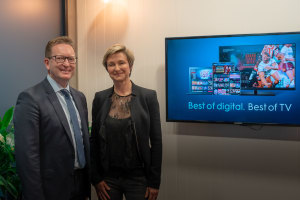 According to Nine, 6.5 million Australians have downloaded its broadcast video on demand (BVOD) platform.

Nine commercial director of digital sales Pippa Leary says this is a significant number, not just because of size and scale, but because of the importance of a "declared database" when defining addressability.

"As a result of having all those sign-ins, ours is not an inferred solution. We don't use any probabilistic modelling," she says.

"This is all deterministic data and without that declared, authenticated data, you simply can't do what we're talking about today. Without real people, you can't do real addressability."

Channel Seven was first to market with a user sign-in option for extras and special content on its VOD platform 7Plus, but it's not mandatory as Nine and SBS apps are. Network Ten only requests sign-in access for certain content.

Seven has not released its 7plus databse numbers to the market.

The initial stage of the launch will see Nine work with partners to offer addressable advertising based on age, sex and location.

Leary added that the network now has the ability to target advertising to people, not to cookies and not to devices.

Despite touting itself as the first Australian broadcaster to offer a "real" addressable solution, with a defined database of users, rival network Seven has hit back, refuting Nine's claims.

Seven, which has its own BVOD platform, 7plus, says it launched addressable TV at scale in Australia during the Rugby World Cup in 2017.

“We have since delivered addressable TV for hundreds of clients and campaigns through our live streamed network programming, the 2018 Australian Open, Winter Olympics, 2018 Commonwealth Games and every day since," a statement from a Seven spokespersons says.

“We target digital video advertising based on a combination of first-party data secured from logged-in and verified 7plus users who opt-in currently through our web and mobile OTT platforms and soon on connected TVs, alongside premium second and third party data partnerships including TEG and Quantium."

Nine chief sales officer Michael Stephenson says the network has invested heavily in its content, data and technology, delivering against the request from the market.

"We want this world where we can have advanced targeting and addressability working together," he says

"There will be a bit of a call to arms from me to the market to say, 'you must now meet us halfway. We've done everything that you've asked and if you do invest with Nine and you invest in this ecosystem, you will get a better return on your investment'."

"We're so confident of that and I think that's a really compelling proposition, so I expect them to be knocking the door down."

Leary also says the targeted advertising offering will also provide the network with an enhanced strategy designed to compete with the services offered to marketers by tech giants Facebook and Google.

"The Nine user ID allows us to offer a similar targeting solution to Google and Facebook, but with far more transparency in professionally produced brand-safe environments across every screen in the house, including - and this is so important - the largest, connected TV," Leary says.

"When we talk about that addressability, we're talking about an addressability that works not only in brand safe fraud-free environments on our desktop and our mobile, this also works in the ultimate environment for telling brand stories - the TV screen - and that's why the growth in connected TV is so important."

Nine revealed that 40% of 9Now streaming is done via connected TV.

MCN, which also has its own addressable TV offering, has previously stated that lines between addressability can become blurred and that the industry's focus should remain on a uniform definition and understanding for what a real offering encompasses.