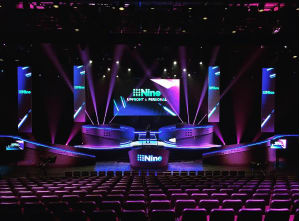 Nine pulled out all the stops for its Upfront event

Nine Entertainment’s Upfront and Personal Event promised to be huge and boy did it deliver.

The media and advertising industry’s finest were treated to nearly four hours of entertainment and announcements at the Star Casino yesterday.

It's no secret Nine has endured a challening year, rocked by poor ratings in the first quarter. The upfronts, which dwarfed those held by rival networks in terms of size, flashiness and expense, were designed to show advertisers and media buyers that despite a bumpy 2016, Nine certainly hasn't lost its touch for showbusiness.

“I think it’s an important thing to do and put a real statement about what Nine is and all the assets and people we have,” Nine Entertainment CEO Hugh Marks told AdNews. “We’re doing a lot, we think what we’re doing is great and we’re confident in the market.

Scattered in between the panel discussions, celebrity wheel-outs and fun, were Nine’s plans for 2017, which will see the network deliver 500 hours of entertainment content and 50 hours of drama. It's Nine’s biggest investment in locally-produced content and a clear signal to the market the network is fighting back with a huge armoury of shiny, new shows.

Heading the programming slate is Australian Ninja Warrior, which brings to these shores the Japanese phenomenon that requires remarkably fit and athletic individuals to navigate a brutally challenging obstacle course in the quickest time possible.

The format has been hugely successful in Japan, the US and elsewhere and media buyers speaking to AdNews post-event have placed it as a safe ratings bet.

“The professionalism, the athleticism, the big entertainment value, the location, Ninja Island – this brand will be huge and provide great family entertainment,” Marks said.

Other programs that caught the eye include Underbelly Files: Chopper, the uncut story of Australia’s most notorious criminal of the 70s to 90s.

There’s also House of Bond, a biopic about famous business tycoon and America’s Cup legend Alan Bond, and the return of Hamish & Andy, who gave guests a taste of what to expect with a hilarious (and trouser-less) skit on stage.

Nine is also introducing a new food format, Family Food Fight, which pits cooking families against each other in high-pressure cooking challenges to be crowned ‘Australia’s Greatest Food Family’. Whether this recipe can compete with the likes of My Kitchen Rules or MasterChef remains to be seen, but Nine is yet to crack it in this genre and is trying to address the gap. The show will integrate into Nine.com.au food offering 9Kitchen.

Another that could rate well is The Last Resort: Love Me or Leave Me. In this “social experiment”, a buzzword for relationship reality trash TV, five fit couples struck by problems of infidelity, trust and intimacy go to a tropical island in a last ditch effort to save their relationships… as you do. Similar US and British formats featuring hot guys, girls, sex and sand are a proven ratings winner among women.

Another interesting show is Murder Calls, a documentary series that investigates real life Australian crimes and how they were solved. Rival Seven has gone big on crime next year and Nine is dipping its toes into a genre that has provided plenty of water cooler moments recently with Netflix’s Making a Murderer and the Serial podcast series.

Nine will kick off the ratings year with an expanded Married at First Sight that sees 20 singles tie the knot – double the size and drama of this year’s series.

“Married at First Sight has been a good franchise for us and the extension of that into a longer format has great potential and that will compete much more effectively in a like-for-like basis with the very successful My Kitchen Rules," Marks adds.

"That was a very early decision to make and an important one for us to make and we’ve built out the rest of the year after. Big shows consistently across the year will be the hallmark of Nine next year."

Aside from programming, Nine’s major announcement was the launch of its programmatic platform 9Galaxy next February.

This will provide advertisers with a dynamic trading solution where they have the choice to buy guaranteed audiences across several programs in addition to spots.

Nine chief sales officer Michael Stephenson has set a target that the network will trade 50% of its TV inventory programmatically by June.

Nine is also beefing up its use of data for better targeting after securing a new deal with Data Republic.

Nine also officially launched 9Honey by announcing that Hadid would become an ambassador for the women’s network vertical.

The Real Housewives of Beverly Hills star shared insights into her battle with Lyme disease in a moving interview with Nine journalist Leila McKinnon.

Marks says that 9Honey is about making sure Nine’s content is taken to the market in the way audiences are consuming.

“It’s a natural extension for us and we make great content so to be able to engage with more audiences across platforms is ultimately our business,” he says. “It’s an opportunity - there’s been players in the market but no-one is significant in doing it at scale like we will.

“This gives advertisers a great mix of buying television at scale and then the targeting you can do through the digital platforms, particularly when you start to add data analytics across the top of that.

If size, scale, glitz and glamour matters to audiences and advertises, Nine’s Upfront and Personal certainly laid down a marker, but whether its expensive gamble on content pays off, only time will tell.

Australia’s most controversial social experiment is about to get a whole lot bigger when it returns in 2017 for the fourth and most explosive series yet.
In this supersized fourth series, three expert matchmakers will have the mammoth task of pairing 20 brave singles, using a mix of neuroscience and psychology to try to create 10 perfect matches – twice as many as before.

Ninja Warrior is one of the biggest shows on the planet – a worldwide phenomenon – and it’s coming to Australia.
Hosted by Rebecca Maddern, Australian Ninja Warrior will be the ultimate television event to hit our screens in 2017. From 3000 hopefuls only 250 of the very best have been given the opportunity to take on the biggest and most challenging outdoor sports course in the world.
Set on the mythical “Ninja Island”, Nine says Australian Ninja Warrior will be the ultimate test of strength, stamina and mental toughness.

Big characters, Bold recipes and Beautiful food: Family Food Fight is a fresh, exciting and relatable take on food.
In this competitive cooking series, diverse and multi-generational Australian families will go head-to-head in high-pressure cooking challenges to not only win the experience of a lifetime but also take home the title of “Australia’s Greatest Food Family”.
Inspired by real home cooking and family food traditions, Nine says Family Food Fight will serve up extraordinary feasts unlike anything we’ve seen before.

The funnymen of radio and television are set to return to Nine in a brand new series.
Hamish & Andy, who previously fronted four hugely successful Gap Year series for Nine, as well as two Caravan of Courage specials, will star in an all-new format, set to be one of the most exciting programs in recent years.

THIS TIME NEXT YEAR

Karl Stefanovic will bring viewers the inspirational new series, This Time Next Year, which will see everyday Aussies achieving monumental personal goals over the most challenging and rewarding year of their lives.
This ground-breaking format will follow the journeys of people wanting to make their ambitions a reality over the course of a year, delivering instantaneous transformations in “time-travel” style.
Once each pledge is made the participant will reappear just moments later, completely transformed 12 months on.

THE LAST RESORT: LOVE ME OR LEAVE ME

A beautiful tropical island is the backdrop to a real-life soap opera as five long-term couples take part in a bold social experiment in an attempt to save their troubled relationships.
The couples have all reached rock bottom – struck by problems of infidelity, trust, and intimacy.
At the end of the month, after an intensive relationship bootcamp with Australia’s ‘leading’ relationship experts, will our couples call it quits or commit to each other forever?

House of Bond tells the outrageous rags-to-riches-to-rags tale of controversial business tycoon Alan Bond (Ben Mingay) and how he fought his way from the back alleys of Fremantle to become the richest man in Australia and one of our greatest sporting heroes.
The mini-series co-stars Rachael Taylor (Red Dog) as Diana Bliss, Adrienne Pickering (Rake) as Eileen Bond and Sam Neill (House of Hancock) as Roland “Tiny” Rowland, with Samantha Jade, Gyton Grantley, Marcus Graham, Anne Looby, Johnny Ruffo, Roy Billing, Paul Gleeson and Jack Campbell.

The groundbreaking Underbelly phenomenon is back with the untold, uncut story of Mark “Chopper” Read, Australia’s most notorious gangster, who cut a swathe through the criminal underworld in the 1970s, 80s and 90s.
Underbelly Files: Chopper will be produced by the makers of Underbelly, Screentime, for Nine.

In this hilarious new series, six groups of ordinary Australians – families, couples and friends – take on the job of travel critics.
Our travel guides experience the same week-long international and domestic holidays, and review the same accommodation, cuisine, and local sights. But one person’s idea of paradise can be another’s idea of hell.

Murder Calls is a crime documentary series investigating extraordinary murder cases from Australia.
In each murder case the investigators get a phone call which leads to a key clue...a clue that exposes the murderer.
The series is a true-life, accounts of heart-wrenching stories and the unrelenting determination of detectives to solve the case.

Join Sophie Monk and comedian Nick Cody in this hilarious new series as they bring you the weirdest families, wildest animals and some of the greatest fails ever to be caught on camera.

The A List is an exciting new eight-part entertainment program hosted by Nine Entertainment Editor, Richard Wilkins.
This series will feature in-depth interviews with the world’s most topical and talked-about artists, actors and A-list superstars.
In similar fashion to Inside the Actors Studio, The A List will be enthralling, amusing and highly entertaining.

In partnership with Nine, the globally successful Hi-5 franchise makes a grand return to Australian free-to-air television with a brand new series, set and cast - reinvigorated by the original creative team of Australian producers and writers.
Casting auditions commence tomorrow, with the new series set to premiere next year.