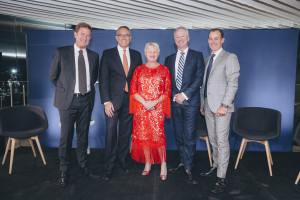 Editors of Fairfax mastheads will be empowered to make editorial calls on their own behalf, Nine CEO Hugh Marks has confirmed.

“Great content brings results and that can apply as equally to print media for the new world, but also with television showing the numbers it does up there in terms of its effectiveness,” Marks said.

When it comes to editors being empowered to make those editorial decisions, Marks said “A loud proud yes”.

Despite not confirming to sign the charter as such, and with one CEO quipping “buy the land, get the Indians” to make light of the matter, the conversation soon turned from the impact on journalism to what the merger will mean for advertisers and audiences.

Marks said the “world is changing”, which means it has to think of the business as providing marketing solutions, rather than “just selling advertisements”.

“It's about working with clients in a way that perhaps we didn't in the past, but we do in the future - and to do that across more than just one medium,” he said.

“We have to take control and understand how to innovate our business so that we can work with customers on better marketing solutions.

“What we know is we need to bring more value into play.”

The panel discussion also hit off the ACCC inquiry with concerns over Google and Facebook's power arising and how they devour a “huge slice of the advertising pie”, while also marking their own homework.

“I would have done even better at school if I was able to score my homework. I would have been bloody brilliant,” Worner commented.

Moves to make the buying of TV far easier and the impact of Think TV, praised for its “industry awakening”, were commended.

Worner also called for the end of overnight TV ratings.

“I don't believe we should provide overnight numbers,” he said.

On capturing the attention of millennials, Anderson mentioned Ten's upcoming pilot week saying by “taking a punt on a whole bunch of shows that are one-offs”, that are punchy and edgy, Ten is hoping this will pay off. While admitting it probably would've been “a bit scared” to pull such a move in the past, Ten hopes its pilot week will pull more millennials into television.

“I think Love Island is a great example of programs and shows not necessarily on the main channel that then allow people to watch it wherever and whenever they want on whatever they like,” Anderson said.

“It's about breaking out of that mindset of producing content and putting it only on the main channel.”

A Fairfax-Nine merger is better than Fairfax collapsing