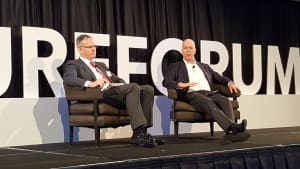 It’s no secret the publishing industry is facing some big challenges in the digital revolution.

But industry bosses are working towards a solution, which will evolve business models and could see more collaboration between historically fierce competitors.

“Our audiences are growing and the brands have great appeal,” said News Corp CEO Michael Miller. “The challenge is the proposition and effectively communicating that.”

Speaking at the NewsMediaWorks Future Forum, Miller said there is work to be done in communicating the value of publishers to agencies, as the industry is seeing the biggest declines from that sector.

It’s something News Corp has itself tried to address with its recent Come Together upfronts event.

When asked about the disconnect between audience growth and advertising growth, Fairfax CEO Greg Hywood referred to Fairfax' strategy to push beyond a purely ad-funded model as “strategic stretch', including initiatives such as Stan, real estate, travel and auto segments where it is investing money and seeing a return.

Earlier in the day, Kalle Jungkvist of Swedish publsiher WAN-IFRA. had said that advertising would not sustain publishers, and warned publishers to be more protective of their audiences and their platforms.

The Swedish publisher describes itself as a digital publisher, that also prints newspapers. The printed product is very much the secondary product. He said publishers need to focus more on getting audiences consuming content in their own platforms and apps - not being happy that their content is consumed on platforms such as Facebook. Facebook, he says is becoming by far publishers' greatest competitor.

His newspapers never use Facebook's Instant Articles, he said, instead pushing its own apps using personalised push notifications for users to drive interaction. Jungkvist's comments echo those shared by Australian publishers in the cover feature of the September issue of AdNews 'The content profit squeeze - publishers held to ransom'. Subscribe in print or download the digital version here.

In reference to Jungkvist's comment, Hywood agreed advertising would not sustain print. “We know that,” he said. “What we do have is the assets of audience sand marketing inventory … you have to open your mind to creating value further down the food chain.”

Miller added that it too is seeking new revenue areas such as monetising through “trade and services" and investing in categories such as food.

He also talked about the changing approach consumers have to paying for content. While in the early days of content online, publishers made the mistake of giving it all away for free which created an unwillingness to pay for content. That is, however, changing, as content subscription services such as Stan, Netflix and Spotify have turned that around and revealed there is a willingness to pay for digital content. Dow Jones boss Will Lewis also made scathing comments about content payment models at the conference - you can read more on that here.

Hywood also took the opportunity to reiterate Fairfax' commitment to print, and defend his decision to close weekday editions of The Age and SMH in the near future. When asked how long he saw print being part of the publisher's future, he said there was a “long life” for print adn that closing weekday titles is “responding to consumers” changing engagement behaviours.

“Eighty percent of people access our titles through digital. Our consumers have the time on the weekend, that they don't have during the week, to look at a high-quality, deep printed product on the weekend,” he said in support of the strategy.

Seven West Media CEO of Western Australian newspapers Chris Wharton said the devaluing of print has come from a “biased market”, which has been impacted by the negative headlines.

Recently, NewsMediaWorks launched the News Media Index, which provided a more holistic picture of the industry, including newspaper’s direct sales for the first time. It paints a less bleak picture of decline, but also revealed agency bookings took the biggest hit.

“We haven’t got the pitch right – internally and externally,” Miller admitted of the industry.

He said publishers need to work together to change the conversations in the market, but also to go to agencies as one sector to create “category confidence”.

“The respected role that news media plays has been lost in conversations with advertising partners," he says.

“We have taken the battle individually but we need to bat back together – we all have responsibility to do that – not just at the leadership level but throughout the industry.”

Fairfax boss Greg Hywood agreed, adding while the likes of News Corp and Seven West Media have previously had rivalry, it’s time to combine forces to tackle the forces of Facebook and Google.

“We need to look at where the real competition is in the market. Instinctively, we compete against each other, but if we actually want to get a hold of the market we need to compete with Facebook and Google,” he said.

There has been much talk of improving collaboration for the greater good of the industry but the reality is often different. Hywood said while publishers currently share printing facilities and distribution networks, further collaboration does come with its own challenges.

“Each business wants to shape its own strategy and there are limitations to what we can do [together] because we are running our own business, not the industry.”

The CEO panel at the NewsMediaWorks Future Forum was moderated by AdNews editor Rosie Baker. More highlights to come.