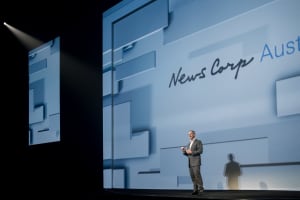 Following its roll out of a raft of advertising and marketing initiatives at its Come Together upfronts event last week, AdNews spoke with executive chairman at News Corp Australia, Michael Miller, as well as several media execs, to see how the showcase went down.

Miller said the event serves as a strong reminder of how much News Corp is doing, despite “some perceptions” that it's not doing a lot.

“We want people to be better informed. There are some perceptions about the company and about the category that we aren’t doing a lot so part of this is a reminder about what we are doing, other than the assumed, and also to introduce the additional investment we are making in our own brands, our assets and also the industry,” Miller said.

“There’s a new conversation that we are able to have which hopefully meets a need that isn’t being met already.”

He said the “packaging is important” and that as a former CMO he knows how it's more about booking 'campaigns', not booking 'ads', looking at how all those campaign parts come together.

“Part of the reason for Come Together is about building the house. It’s how the house comes together and how our business comes together – and that it’s ever-changing and is changing quickly,” Miller said.

IPG Mediabrands CEO Danny Bass said it's interesting to see how the event has evolved over the last three years.

"What was interesting was a lot of focus on how [News Corp assets] come together," Bass added. “What I really got out of it was the way they want to do business with media agencies and clients. There is a real focus on making it easier.”

Miller said clients are now more directly involved (as opposed to via agencies) with News Corp than they were five years ago, and the trend of agencies wanting to talk more about content has also ramped up.

Headlining the announcements was news the publisher is launching a dedicated food network, called Food Corp, designed to further leverage the success of Taste.com.au and NewLifeMedia’s (NLM) portfolio of food brands.

He said the client-facing move to launch its Food Corp network shows its volume proposition when it comes to food, reminding people it has a big portfolio, including brands such as Donna Hay, Delicious and its aggregator social sharing site Taste.

Miller suggested that type of “volume play” was perhaps being missed slightly. “This makes it front and centre and reminds people what we have – not just a print offering, but a multimedia offering,” he said.

Speaking to AdNews, Publicis Media CEO Matt James said structurally, through new divisions such as the Solutions Studio, News Corp has evolved its operations to ensure it delivers top solutions for Australian advertisers.

However, he added the challenge will be how all of these properties can hang together to produce truly integrated campaigns, that can be measured with a dependable and conclusive ROI.

“There is no doubt, if News Corp wanted to deliver an impression of scale, it worked. It is evident the collective power of the News Corp assets has strong momentum particularly through its array of acquisitions and new launches,” James said.

“Strategically, its emphasis on delivering digitally-focused consumer-centric content underpinned by robust consumer understanding platforms such as Storyful and Unruly certainly casts a lens of differentiation for News Corp's proposition.”

James added that if News Corp “continues to be brave with their client partners” he has no doubt the industry will see some great work over the coming months.

The publisher also launched News Corp Australia Media and Marketing Institute, in partnership with Melbourne Business School, to provide a program to nurture future marketing talent. It will focus on brand strategy, audience segmentation and targeting analytics. This program will be headed up by the outspoken marketing professor and consultant, Mark Ritson.

It also expanded on the News DNA structure, which was announced earlier this week, with Nicole Sheffield named as the MD of the digital arm. The new business unit aligns all of News Corp Australia’s digital assets within news, food, lifestyle, prestige and women’s categories.

UM CEO Ross Raeburn said he thought the event was “really interesting”. “The ability through DNA to build precise target audiences across titles and based on a multitude of segments, plays to UM's Creative Connections platform,” he said.

Bringing in a new currency

Bass added that he thought Sheffield's presentation on digital daily ratings and bringing in a new currency and using language around TV-style metrics interesting.

“Making that play for non-traditional news dollars, it gives us some insights into what News DNA will be focusing on,” Bass said.

On the launch of Stellar, Bass also paid tribute to News Corp's commitment to producing a high quality print product at a time when others are transitioning into digital.

“Their messaging around the audiences they have [for their Sunday newspapers] have been pretty consistent; that its the largest audience in the country...and they are backing this up by investing in products," he said.

“If people want to see that News is still backing the power of print, there can't be many media owners around the world demonstrating that in the way News did.”

“A smart move by them to increase their stranglehold of food culture with Food Corp and it was also good to see their continued focus on premium video content backed by Unruly and Storyful,” Dawson said.

In addition to riding the property wave, utilising its REA offering and the food fad, Miller said sport, and more particularly reaching males via sport, is also set to become more of a focus, as well as the car market and travel.