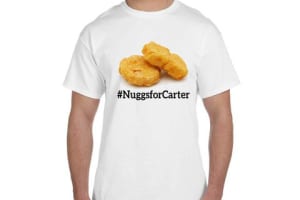 Wendy's has struck social media gold thanks to a Nevada teenager. If you haven't heard of #NuggsforCarter by now you must not be on Twitter. The hashtag began rising in popularity after high-schooler Carter Wilkerson innocently sent a tweet asking for free nuggets. The tweet exploded, with other brands taking part and the retweets skyrocketing now to now just under three million, meaning he could overtake Ellen DeGeneres’ famous Oscars selfie tweet from 2014 – the most tweeted 3.35 million retweets.

HELP ME PLEASE. A MAN NEEDS HIS NUGGS pic.twitter.com/4SrfHmEMo3

Myer bought iconic Australian brands Marcs and David Lawrence, bringing them exclusively into their stores. The purchase is part of the ‘New Myer’ strategy introduced last year. Myer will acquire the brands, intellectual property and inventory of Marcs and David Lawrence. Myer is working with the administrator to determine the future of the brands’ concessions, free standing stores and arrangements with other retail partners.

Bauer will no longer publish Outdoor magazine, handing over the duties to Adventures Group Holdings. Adventures Group Holdings was founded by former Bauer employee Rob Gallagher, who purchased five other magazine brands from the publisher last year. The move follows the streamline of Bauer to a five-pillar strategy, which has seen it close the doors of several magazines and focus on areas of advertiser interest. Bauer remains the owner of the Outdoor brand.