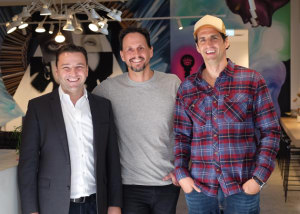 Former Starcom Melbourne MD Peter Toone has joined independent digital agency Rock, which was established three years ago. Toone had previously worked at Starcom for 11 years before resigning last December. Rock managing director and founder Cam Lee said: “Pete is a great fit for our business. He brings a wealth of large agency experience obviously, but he’s also a great cultural fit for our team which was key. It’s great to have him on board to help take the business to the next level.” Toone said that he was draw to Rock by its “commitment to senior involvement with clients, and their willingness to adapt to current and future client demands without sacrificing the quality of delivery”.

Natural healthcare company Soho Flordis International (SFI) has appointed Orchard as its social and digital content agency following a competitive pitch. Soho Flordis’ most recognised brand in Australia is children’s cough remedy Prospan. Orchard will pick up global responsibilities for all digital and social content across all of SFI’s products with activities launching in Australia first. SFI products are sold in more than 50 countries. Orchard recently joined the Enero network and its clients include Schwarzkopf, Hyundai, Asaleo Care, Electrolux and Carnival Cruises.

Independent digital media agency Admatic has hired James Shaw as national head of performance and activation. Shaw joins from CHE Proximity, where he was head of performance and will be joined at Admatic by CHE Proximity’s performance director James Deehan. “Our performance and activations division is critical to our proposition of uniting brands and customers through the unrestricted possibilities of digital,” Admatic national MD Matt Crook said. “They have a great history of delivering brilliant and award-winning work together and we are very flattered and proud that they have chosen our business as the place they feel they can build on their careers and provide them with the environment to be at the forefront of change”

WPP AUNZ has welcomed three interns (pictured above), Abi-Leigh Dillon (WPP AUNZ), Amy McCutcheon (MediaCom) and Jacinta Evans (Ogilvy), in its first intake as a partner of the Career Trackers Indigenous internship program. WPP AUNZ joined the program as part of a commitment to a diverse workforce and plans to expand the program to more agencies within the group. “We acknowledge that we need to be more active in providing opportunities for Indigenous Australians,” WPP AUNZ’s Chief HR & Talent Officer Elissa Good-Omozusi said. “The Career Trackers program has helped WPP AUNZ engage with students to experience what a career could be in media and advertising, while helping to build their network and support structures.”

Screen Australia has invested $17 million into 23 productions across Australia. The investment will spread across six films, 10 TV series and seven online productions with a combined production vale of $142 million. The TV dramas that will receive funding include Stan Original series Bloom, Network Ten’s Playing for Keeps, SBS series The Hunt, ABCs satirical morning show Get Krackin and tween series The Unlisted. “This slate represents the most money we have ever invested in adult TV drama in a single round. Indeed in the ten years Screen Australia has been operating, the near $20m we have invested in adult TV drama in the 2017/18 financial year is an all-time record,” Screen Australia CEO Graeme Mason said.

Creative agency Taboo has hired creative director Nick Jamieson from Clemmenger BBDO Melbourne, where he was a creative director of activation. Jamieson has worked on clients including MARS Chocolate, Petcare, CUB, Nike and Fonterra. The agency has also recruited Tatum Ambler, formerly of Starcom and Publicis, as digital strategist. Ollie Reeves has joined as senior account director from CHE Proximity and Melanie O’Rourke joins as creative services director. She has previously worked at GPY&R, DDB, BWM and BMF. Taboo director James Mackinnon said: “We always look for people who have a genuine love of ideas and creativity but also the sense to see beyond the echo chamber of the agency boardroom. To welcome these four talented and diverse people is incredibly exciting for both us and our clients.”