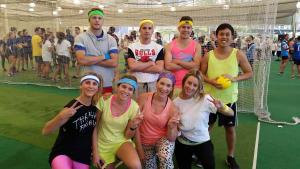 The Fairfax team at the dodgeball competition.

People-based marketer Signal has raised $30m in funding. I2A led the round with participation from other major investors, including Pritzker Group Ventures, Baird Capital, EPIC Ventures, and Silicon Valley Bank. Signal will use the proceeds to expand its technology platform and the organisation globally.

NGEN and UnLtd has raised more than $30,000 for UnLtd charities through its annual dodgeball tournament across Sydney and Melbourne. Top fundraisers included the Bohemia team in Sydney who raised nearly $5,000, and in Melbourne the NewsCorp team took out first place for the second year in a row, raising $1,300. In Sydney, the Starcom team were unbeatable and took out Mediacom in a very heated Grand Final match, and in Melbourne the OMD team lost out to the Seven Affiliates team who were crowned the champions of the tournament.

Network Ten has announced the appointment of Rod Prosser to the new role of director of revenue and client partnerships, reporting to CEO Paul Anderson. Prosser will be responsible for managing and enhancing Ten's relationships with key clients and its partnership with Multi Channel Network (‘MCN’), as well as Network Ten’s commercial integration division.

Sky Network has entered into a trading halt, after confining it is in discussions with Vodafone regarding a potential transaction. The discussions, which Sky noted are “ongoing” and involves talks on a "combination of the businesses of Sky and Vodafone New Zealand".

Multi Channel Network (MCN) has announced an extension to their partnership with National Geographic, taking on the sales representation of nationalgeographic.com’s Australian audience. MCN currently manages traffic across the publisher’s recently re-launched local website nationalgeographic.com.au and National Geographic’s three television channels in the Australian market. The agreement is set to add a further 675,000 unique monthly visitors to the sales house’s network.

In addition, PressStart's founder and owner Shannon Grixti will be managing editor of the brand.

Grixti says: “SCA have offered me an opportunity to take PressStart to the next level. Their radio broadcast and digital publishing reach as well as their social communities are the megaphone PressStart needs to become truly great.”

Mortgage broker Aussie Home Loans has appointed Special Group as its creative agency across brand strategy, design and communications, following a competitive pitch.
Lindsey Evans, Founding Partner of Special Group, says: “Aussie is one of the best challenger brand success stories in Australia; having disrupted the mortgage category and changed industry behaviour to benefit millions of Australians. We are privileged to be able to help them continue that legacy.”