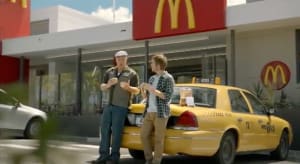 "Omnicom has built a new agency of the future for us," McDonald's US chief marketing officer Deborah Wahl told Ad Age. "This agency of the future really has digital and data at the heart, which allows us to be customer obsessed at a whole new level in everything that we do."

Twitter has named Jayanta Jenkins as its global group creative director, the social giants highest creative role. In the role, Jenkins will oversee Twitter's in-house creative team, reporting to VP-global brand strategy Joel Lunenfeld. Jenkins, who Ad Age called an ad industry veteran, most recently held the role of global creative director of advertising at Apple/Beats by Dre. He has also worked with the likes of Nike, Gatorade and Powerade, just to name a few.

All signs are pointing to Apple unveiling the latest iPhone on 7 September. The technology giant just sending out invites to a press conference on that date. While the invite doesn't say much, the media is already speculating that it will be the iPhone launch, along with what features the new device will have or not have. Along with the new phone, Apple is also set to reveal what its new software update iOS 10 will look like.

Software company TubeMogul has appointed former Outbrain director Ben Peacock as its vice president of agency channel for Australia and New Zealand. In his new role he will be responsible for leading its team in partnerships with agencies and working with clients to integrate its software into their operating processes.

Peacock spent four years at Outbrain as director of brands and agencies in both London and Sydney.

Clemenger BBDO Melbourne has appointed Nick Campion as its new group account director, from a role at Weiden and Kennedy. Campion has relocated to Australia for the role at Clemenger. During his time at Wieden and Kennedy he ran accounts for clients including EA Sports FIFA, Need for Speed, Audi and S7 Airlines.

Hulsbosch has appointed Simon Hong as its new ECD. In his new role Hong will be tasked with managing the agency's creative development and direction. He has more than 20 years' experience across a number of disciplines including his latest role as a global principal at Wolff Olins.