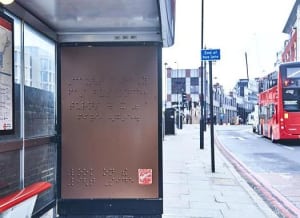 Chocolates used to create a Braille poster
As part of World Braille Day, together with its agency AMV BBDO, Mars brand Maltesers has used model chocolates to create a one-off Braille billboard to champion diversity in advertising.
The advert appears on a London bus shelter and spells out the words “caught a really fast bus once, turns out it was a fire engine”. There's also an audio message that directs people to Maltesers' Facebook page. The words used for the campaign came from a blind woman who took part in a focus group held by Maltesers and disability charity Scope. The billboard follows the brand's same 'Look on the Light Side' campaign which included three TV ads featuring disabilities. They aired during the Paralympic Games Opening Ceremony – one of which was first ever TV ad to air entirely in sign language.

Adobe gets to work post TubeMogul buy
Job changes are under way post Adobe's TubeMogul acquisition, with fellow Aussie Stephen Hunt now becoming director of sales West Coast at Adobe. Hunt established the Australian subsidiary of TubeMogul in 2012 before leaving for the states with Tube. As a result of the deal worth $540 million net of debt and cash, LA-based Hunt and his team are now part of the Adobe Marketing Cloud. Hunt will help with the merging of Adobe's toolset with TubeMogul's platform.

Tribe's new pedestrian
Pedestrian's advertising and partnerships manager and AdNews Young Gun, Jordan Gelbart, has left the Surry Hills based gig after nearly two years, for a spot at Jules Lund's business Tribe. Gelbart is now agency partnerships manager NSW at Tribe. In April last year the social media influencer startup said it was seeking $5 million from investors for expansion, on a company valuation of $15m.