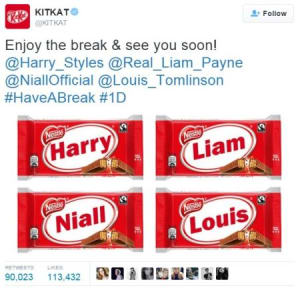 It's about time there was some clever tactical social marketing going on, and Kit Kat has delivered. Jumping on the news that British pip phenomena One Direction are 'taking a break' next year after a relentless touring schedule and the departure of Zayn Malik earlier this eyar, Kit Kat took the opportunity to adapt its long-term brand slogan 'Take a Break' for the occasion. It tweeted the boys with a picture of its packaging with each of their names. The tweet was retweeted by Harry Styles, and has now been retweeted 90,000 times and has 110,000 likes.

GroupM has acquired programmatic marketing company The Exchange Laboratory and its programmatic technology Proteus and is integrating the new business into its Connect unit, which brings together data, operations and technology across search, programmatic, social, mobile and all other real time and biddable media. The Exchange Lab has approximately 130 employees working in offices in London, New York, Chicago, Singapore, and Toronto, serving 700 clients this year, including Virgin Holidays and Volkswagen.

The Brisbane Times speculates broadcasters could join forces to tackle global subscription video on demand (SVOD) providers after earlier attempts to unite the industry failed. In 2013, Telstra's Project Thunder attempted to provide a single technology platform that could store and manage the content of other network players, allowing users a single portal for local SVOD content to rival Netflix and Google. Telstra's plans failed as the technology was not ready to launch and had been designed to run on Foxtel rather than any other player. However, as Netflix has rapidly become Australia's most popular SVOD service after only nine months of operation, network chiefs are calling for unity to tackle global rivals.

Cricket TV ratings should still be “very good” despite the West Indies woeful first test performance, Carat Australia chief executive Simon Ryan (pictured) said. Australia demolished the Windies in two-and-a-half days in the first of a three-test series, and there are concerns viewing numbers could be affected for the iconic Boxing Day test in Melbourne and the Sydney test early in the New Year -  the two biggest money spinners on the Australian cricket calendar. Speaking to Fairfax, Ryan said advertisers recognise live sports events could be cut short by weather or one-sided contests and that such fluctuations should be factored into the negotiation process.

Yahoo7 launches catch up on Apple TV
Yahoo7 has launched a new PLUS7 App for Apple TV. Programs including Home & Away and My Kitchen Rules, US dramas Grey's Anatomy and Chicago Fire and kids' shows The Woodlies, Bottersnikes & Gumbles and The Deep will be available. Ed Harrison, Yahoo7 CEO, said: "At Yahoo7 we’re focused on making our premium content available wherever and whenever our viewers want it, and our new PLUS7 App will allow us to reach a new audience of Apple customers. PLUS7 recorded its highest ever traffic day on 9 December reaching 320,000 viewers. Clive Dickens, chief digital officer, Seven said: "PLUS7 ends the year as the leading Commercial FTA on-demand brand with long form streams increasing by 16% year on year. We are really pleased to able to extend the Channel Seven Content to this the new PLUS7 App for the new Apple TV."