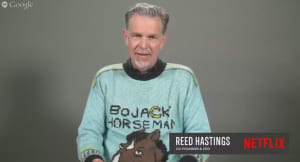 Netflix has put a firm stop to suggestions that it will form a permanent part of any telco or ISP bundle, while highlighting that a “strong launch in Australia” has contributed to the addition of 2.4 million international users.

Bosses last night hosted a particularly positive quarter two investor call out of the US, boasting the latest set of figures and stressing that the service will remain a standalone, unbundled operation.

Co-founder and CEO Reed Hastings refused to break out international figures by territory for “competitive reasons”, but said that the increase, which takes the total international Netflix subscriber base to 23 million, was “beyond expectation”.

He also re-established the company’s position that Netflix will remain a standalone IPTV operation, existing outside of mainstream TV network or ISP bundles, putting an end to speculation that it could, in the future, form a permanent part of an Optus – or any other carrier - bundle.

Netflix’s three-month launch deal with Optus came to an end at the end of May. Optus subscribers were given the opportunity to trial the service for free, but no doubt at some considerable expense to the telco which used it as a leverage tool for a high-profile marketing campaign, featuring Ricky Gervais.

Hastings likened Netflix to Foxtel/Seven West joint venture Presto in Australia, using it as an example of the current trend favouring investment in unbundled entertainment services.

“Presto in Australia is an unbundling,” he remarked, “It’s something we see more broadly: the rise of internet TV and the idea that individual apps and the right to choose is something that’s coming together.

“It’s up to users to choose that, so we might be billed by a provider – Orange in France does that – as part of your cable, if you will, but Netlfix will remain a line item at $7.99, or whatever the local pricing is.”

Presto currently has the rights to exclusive HBO content, potentially explaining why it is so high on Reed’s radar.

The Netflix boss – who appears on the video call in a woollen sweater featuring Netflix animation star Bojack Horseman – also revealed that developing local content for international markets is on the company’s agenda, but believes that the service’s current mix of content is working efficiently enough.

Chief financial officer David Wells further clarified: “As we penetrate deeper into local markets, there will be a question of whether we’ll add a local mix, but it will have implications on our local spend and in each market now, our current mixture is working.”

However, Wells stressed that localised content – for example, the programming the company has invested in from Latin America – does tend to find scale on an international level.

The Australian launch of Netflix, which was accompanied by a promotional offer with Optus, took place during the company’s first quarter in March this year. However, its effects have had a direct impact on the performance of the IPTV service during quarter two – April-June.

“We are at the forefront of a wave of global internet TV adoption and intend to make our service available throughout the world by the end of 2016,” Reed concluded, pointing to the company’s plans to launch in Spain and Italy in the next quarter and its first Asian territory – Japan – in quarter four.