Nearly 800,000 pay for YouTube's bout between Logan Paul and KSI 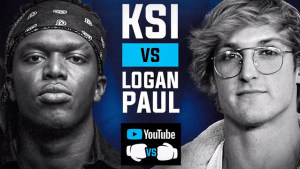 The heavily hyped fight between YouTube stars Logan Paul and KSI attracted an official audience of 773,000 pay-per-view streams although it is estimated that millions more watched the bout through unofficial broadcasts.

Dubbed as the ‘biggest event on YouTube’, the pair fought out a draw in front of 15,000 fans at the Manchester Arena in England.

Media reports estimate millions of fans watched unofficial streams on Twitch, Twitter and other internet platforms. At one time during the bout, Twitch counted just over million viewers on its platform alone.

Although the YouTube stars do not have the same pulling power as elite professional boxing, it is still a significant audience for a pay-per-view event.

The fight had been heavily hyped by the pair, who each have more than 18 million internet followers.

The event had stirred up plenty of publicity due to recent controversies surrounding the pair. Logan Paul  recently filmed a dead body in Japan, which led to his channel being removed from YouTube Preferred.

KSI, whose real name is Olajide Olatunji, has also received criticism in the past for comments towards women in some of his clips.

On the undercard, Logan Paul’s brother Jake defeated KSI’s brother, who is known online as ComedyShortsGamer.

It is likely a rematch between Paul and KSI will take place in the US.