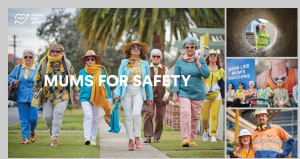 Naked Communications, The Brand Agency and Houston Group have all scored Lions on day three at Cannes Lions International Festival of Creativity.

Naked Communications won a Silver Lion in the PR category and Bronze Lion in the Direct category for its Sans Foregetica typeface for RMIT University.

The agency has already scored two Bronze Lions in Design and Industry Craft this week for the work.

The Brand Agency Perth won a Bronze Lion in the Direct category for its work Hungry Puffs for Foodbank WA.

The work has also received a Bronze Lion in the Media category and a Silver Lion for Design.

Houston Group won a Silver Lion in the PR category for its Lendlease Mums for Safety created with In The Thicket.

Lendlease worked with Houston for help to execute a safety campaign that would resonate with their thousands of office and construction workers around the globe.

The work featured seven real-life Lendlease workers and their mums, and leveraged the theme of mothers having their children’s backs to deliver a “stay safe at work” message.

The Monkeys, part of Accenture Interactive, won a Bronze Lion in the PR category for its work New Australia Land for Meat and Livestock Australia (MLA).

The summer campaign called for Australian and New Zealand to unite over its love for lamb.

In the Direct Lions, celebrating targeted and response-driven creativity, 2,005 entries were received and 42 Lions awarded: one Grand Prix, five Gold, 12 Silver and 24 Bronze.

The Grand Prix was presented to ‘The Whopper Detour’ for Burger King by FCB New York. The work created an app enabling people within 600 feet of one of the 14,000 McDonald’s locations in America to unlock a deal for a 1-cent Whopper.

Direct Lions Jury President, Nicky Bullard, Chairwoman & Chief Creative Officer, MRM McCann, said: “Our Grand Prix was completely brilliant – ‘completely’ being an important word. It had everything. Targeting, amazing execution, a clear call to action and results. On top of that it’s one of the most audacious campaigns any of us had ever seen.”

In the PR Lions, which celebrate the craft of strategic and creative communication, 1,857 entries were received and 55 Lions awarded: one Grand Prix, six Gold, 22 Silver and 26 Bronze.

The Grand Prix was presented to ‘The Tampon Book: A Book Against Tax Discrimination’ for The Female Company, by Scholz & Friends Berlin. The work was created in protest against the unfair taxation of feminine hygiene products, still considered luxury goods and taxed at a higher rate in Germany.

PR Lions Jury President, Michelle Hutton, Managing Director, Global Clients, Edelman, commented, “We are proud to have chosen “The Tampon Book” a book designed to highlight tax discrimination. At its core we believe it is a perfectly formed public relations campaign - from conception of the idea, to the impact it delivers. It represents a modern take on communications combining creativity and the art of PR. It is a call out to the creatives of the world to show public relations has some of the most interesting challenges. It demonstrates that a campaign that sets out to change law can be 'super-powered' though creativity.”