My name is Ruben Guthrie and I am in advertising 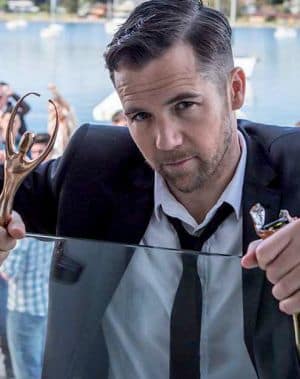 “Let’s get smashed!” If this line was going to open a film about any industry, it’s fairly fitting that it’s about advertising.

The long hours, parties, pitches, shrinking budgets, booze, drugs, and pressure... basically, advertising has all the ingredients for spectacular personal explosions, and all people need sometimes is one little spark for all of these things to combine and combust.

Enter Ruben Guthrie. He’s a creative director at one of the most famous Australian ad agencies in the world, GPY&R, and he’s celebrating his latest award win in the only way he knows how – with lashings of booze.

So begins the story of an individual trying to find his own path, despite everyone around him trying to tell him which road will suit him best.

The film, a remake of Brendan Cowell’s play of the same name, is the actor/screenwriter’s first foray into movie directing. It opened the 2015 Sydney Film Festival, and hits cinemas on 16 July.

But while the play – which drew sellout crowds at Sydney’s Belvoir St Theatre in 2009 – was much more "dreamlike", according to Cowell, and set in fictional agency Subliminal, for the film, GPY&R gave over its name and offices to back the film and add to its authenticity.

“The authenticity is inherent in the storyline. It’s about a creative director in an actual advertising agency, selling actual products. It just so happens to be our job. It couldn’t be more appropriate for us,” Dowling says.

Ruben Guthrie is semi-autobiographical, and the lead character’s main vice is alcohol. He struggles with it in a big way throughout the film, however, Dowling is quick to refute that it’s a reflection of a wider problem in the ad industry.

“I think this is a statement on an individual who’s suffering from a personal crisis at a moment in time," he says. "I’m not even sure if it’s a lifetime crisis – it’s just a moment in time for him, and undoubtedly he’ll probably keep questioning that.”

Cowell adds that for him, it’s more than just a film about alcohol – it’s about a guy who sticks his head out and tries to change, in a society that won’t really let him.

“What I love about Ruben Guthrie is he’s a bit of a trail blazer. He’s got to finish this mission and get to the end of the journey. But when you get to the end of any journey, the mountain doesn’t look how you thought it would look, because you’ve changed,” explains Cowell.

“What I’d like audiences to take out of the film is, very easily in this culture we’ll knock people down or rip people’s heads off if they stick them out. If they dress in a different way, say things we don’t agree with, are a little flamboyant, a little different, we love to beat those people down. Often they end up leaving the country or just disappearing. This is a movie that says: ‘Why don’t we get behind people who want to make a paradigm shift?’”

“I think we all toe the line and we are all sitting in the middle trying to be liked. I like the Rubens. I think we need more Rubens. Rubens are always going to fuck up and fall off roofs and stuff, because that’s what they’re like, but they’re also people who can create a little more dynamic.”

But the film hardly depicts the ad industry as wholesome, so is it risky for GPY&R to put its name to it? As McCann discovered through the airing of TV’s Mad Men, a real agency’s name can be muddied by its portrayal in a fictional drama.

For Dowling, the reason the agency got involved was twofold. Firstly, it was to support creative culture and the creative community, but he also wanted to inspire and motivate the agency in its 80th year.

“In our business, my job – our job – is to motivate and inspire,” he says. “That means a lot to any business, a bit of motivation, a bit of desire to want to be in our building. When we first thought about this, inspiring our team was quite important – having something to be inspired about.”

Bart Pawlak, executive creative director of the agency, agrees. “The fact that we’d been around for 80 years, and it represented a new thing for us to get involved in and get behind, probably sent a message internally to our staff, but also externally to the industry and business community, that we’re making forays into new things. Even into the way we market ourselves and talk about ourselves as an agency,” says Pawlak.

It was also important for the agency to feel as though it had the guts to get involved in such a project and do it in an authentic way, without calling any shots about how the story was told.