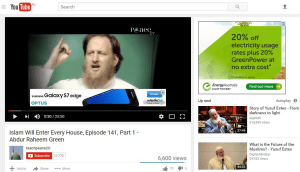 This article has been updated from the original piece published on 21 February 2017 with a response from Google (see below).

Advertisers need to be wary that placing ads on YouTube always poses a reputational risk and the best way to ensure a brand safe environment is to consider premium, locally produced publishers that have stringent vetting procedures in place, digital media experts have warned.

AdNews discovered local organisations were also being exploited with examples of Foxtel and the University of New South Wales creative placed against undesirable content.

This morning, it took AdNews five minutes to discover that Optus and Energy Australia had ads placed on and next to a 25-minute video titled 'Islam will enter every house', featuring Abdur Raheem Green (pictured below).

Green is a controversial Islamic preacher that the Australian government had previously banned from entering the country in 2005 and had been on a watch list, although he claims his views are now more moderate.

Other brands that AdNews found placed next to undesirable content include Unilever and Pizza Hut, ironically by virtue of being on a marketing case study ad before a religious video.

The same with Unilever. This search took five minutes.

Poorly maintained white lists and the lottery of buying audiences on YouTube have been blamed as the source of the problem. AdNews can confirm that brand safety can never be assured on such channels.

GroupM director of technical operations Timothy Whitfield tells AdNews that channel owners, even those that are part of the YouTube Preferred programme, are always responsible for the brand safety of content on their own channel.

“There isn’t any automatic vetting of videos before they get published. Therefore, just because a channel is part of the YouTube Preferred doesn’t automatically guarantee that it’s brand safe,” Whitfield explains.

A recent high profile example of how difficult it is to police brand safety on YouTube involves popular Swedish influencer PewDiePie (whose real name is Felix Arvid Ulf Kjellberg). The gaming superstar, with more than 50 million fans, recently uploaded a video in which two people held up an anti-semitic sign.

While PewDiePie assumed the gag might appeal to fans of his quirky sense of humour, it was not an environment suitable for brands. Disney quickly dropped PewDiePie as one of its brand ambassadors and Google says it has removed PewDiePie's channel from its Google Preferred platform.

The problem brands face is that current technology only allows text on a page to be vetted for red flags, so brands that want to tap into PewDiePie's massive audience would not have been aware of the risk unless a media partner viewed the video manually.

“I personally looked at the META tags on the page and found the following tags were associated to the article. ‘I've Discovered The Greatest thing online’, ‘pewdiepie’, ‘pewds’, ‘pdp’, ‘pewdie’, ‘fiverr’, ‘fiver’, ‘website’, ‘funny’,” Whitfield adds.

“This is obviously not enough information for any brand safety company to classify this as a brand safety risk. Even if the above points were different it wouldn’t matter because YouTube doesn’t allow for 3rd party Ad-Blocking software.”

Suzie Cardwell, the digital partnerships and product development director at Multi Channel Network (MCN), tells AdNews that brands need to consider two factors for brand safety – if the ad was viewed by a human and if the environment the ad is placed in is safe.

“The content that runs around ads is at the heart of the problem facing advertisers on Facebook and YouTube in particular. They don’t receive any guarantees around the exact content against which their ad is going to run,” Cardwell adds.

“When you book a campaign on YouTube, you are buying an audience. The content against which that audience is viewing will vary widely, so your ad is going to run alongside content that you might be surprised to find it’s running against.”

Cardwell explains that when content placed in these environments, advertisers know exactly which channels and sites their creative will run on and that content is “professionally produced by some of the world’s leading content producers”.

“Ultimately that procedure is transparent as well. We provide reports to you as to where your ad runs, on which site and section of the site.

Cardwell believes that YouTube’s low cost is "definitely playing a factor" around brand's decisions to buy into YouTube.

"But when you are buying inventory that is cheap – it’s worth asking the question why,” Cardwell says.

“From our point of view, that inventory is cheap because it is content that is not always professionally produced and could not just as easily be seen on television or put on their websites.

“Advertisers and agencies need to be asking much harder questions throughout the value proposition. I also think YouTube should be prepared to be open and transparent.”

Ultimately, the message from media owners and agencies is clear: “Locally produced, high quality, journalism on premium Australian publishers tend to have better brand safety as the content is heavily vetted,” Whitfield says.

"We work to prevent ads appearing against content that is not appropriate for our advertising partners through a combination of technical algorithms and human review. Users can also provide feedback on specific ads or our policies through our online form," a Google spokesperson says.

YouTube uses a technology and policy enforcement processes to determine if a video is suitable for advertising.

This includes automatic checks that look at text features of a video, such as video title, metadata and visual imagery, to decide how appropriate the video is for general advertising as well as community flags to raise inappropriate videos for review.

Advertisers are able to control where ads may appear on YouTube, including targeting of audience demographics, topics, category and content appropriateness.

Videos that do not meet policy guidelines can be removed or disabled from advertising.