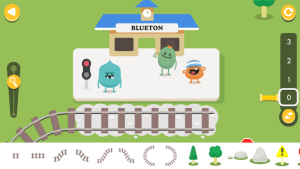 The app, Loopy's Trains Set, is aimed at 3-7 year olds and aims to provide problem-solving challenges which, while fun, also include safety messaging.

The new brand is an extension of Metro Trains' Dumb Ways to Die platform, created by McCann Melbourne, which has been a hit with consumers and advertising award ceremonies alike.

In its initial run, Dumb Ways to Die was the most awarded campaign in the history of Cannes, with 28 Lions including five Grand Prix trophies.

“We really wanted to share this with the early learning segment so we created this ancillary brand, Dumb Ways Jr,” Alsop says.

“We’ve doubled the cuteness, kept a bit of dumb and removed the death – so it’s entirely age appropriate for our youngest audience.

“We’re really proud of this app – it’s another important opportunity to build our safety brand while educating little ones about the importance of rail safety.”

The game can be played with Wi-Fi or internet. Metro Trains plans on launching more Dumb Ways Jr apps across the year including extending the apps beyond train safety.

It follows news from Metro Trains that it had licenced its Dumb Ways to Die platform to Denver's Regional Transportation District.