McCann's Dumb Ways to Die to roll out in the US 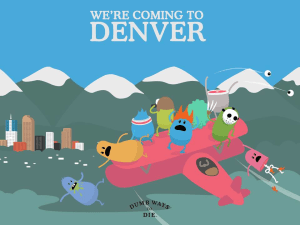 McCann Melbourne's award winning campaign for Metro Trains Melbourne (MTM) 'Dumb Ways to Die' is set to roll out across Denver in the US under a new licensing deal.

The campaign will be the core of a new safety push by the Regional Transportation District (RTD) in Denver after the group approached MTM to license 'Dumb Ways to Die' last year.

The deal has seen the original Dumb Ways to Die campaign adapted to include messages for its bus customers in Denver.

So far, the Denver-specific campaign has seen characters from the franchise arrive for a photo op at the city's Union Station.

RTD interim general manager and CEO Dave Genova says using the campaign will be key to its safety program, which includes education resources for school children, a promotional campaign and a dedicated digital hub.

“Safety is RTD’s number one priority and we have an excellent safety record that we want to maintain in the upcoming year with the expansion of our bus and rail service,” Genova says.

“The Dumb Ways to Die campaign has proven to be wildly popular and effective in Melbourne and we plan to use it here in Denver metro area to bring the serious message of being safe around buses and trains to a wider audience through humour and animation.”

The re-badged campaign, called 'Dumb Ways to Die – Take the Safety Pledge' will be rolled out from today.

“Our campaign evolved in 2012 out of a discussion with platform staff and drivers who witness people risking their safety around train stations and at level crossing," Waymark explains.

“Education made entertaining and in particular educating young people about being safe around trains (as well as buses and anything else) in a style and language young people will engage with is at the core of what this campaign is about.”