MediaCom CEO on the art of great leadership 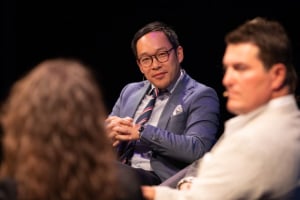 A self-described “off the charts” extrovert, MediaCom CEO Willie Pang discussed the art of great leadership at the recent AdNews Lessons in Leadership event.

Speaking alongside M&C Saatchi CEO Jaimes Leggett and Leo Burnett boss Melinda Geertz, Pang reflected on his own approach to leadership, noting that the perception of a chief executive’s role is often far different to the reality.

Eight months into the top position and Pang believes he’s found the key to success in building true connection with his team.

“How do we find a whole of leadership perspective to really build true connection with a team and care about what they want because life is busy? Doing work and doing life, these things aren’t disconnected. Finding a way to get those two things operating in unison is, to me, what great leadership looks like,” he said.

This approach sees Pang lean on core individuals within his senior management team, in an effort to balance the “see-saw” of human and business needs.

“My CFO and our head of talent and head of HR provide the balance on what is the human need of the business,” he explained.

Pang’s servant leadership approach favours the use of centralised dispersion.

Pang was quick to disabuse the notion that leadership positions are not always rosy, admitting “it can be a lonely job and not a popularity contest.”

Following his appointment as CEO, Pang took MediaCom through the largest scale restructure the business has seen for over 50 years.

Speaking to the widespread changes made at the beginning of his tenure, Pang said there have been defining moments in which the business has shifted into another gear.

“There’s a difference between accepting diversity in a leadership group and the acceptance of ‘hey this just isn’t going to work’ and we have to do something,” he said.

Pang has worked for MediaCom in multiple capacities, celebrating his third year with the company this November.

First entering the Melbourne offices as chief digital officer in November 2015, Pang shifted to the role of chief operating officer in July 2017 before ascending to chief executive officer in March 2018.

Previously MD of Yahoo’s search marketing business, he has a media career spanning 20 years. He has held leadership roles at Melbourne IT, Experian Hitwise and media agency Emerge.