Media owners vs agencies – who will win the big cricket clash? 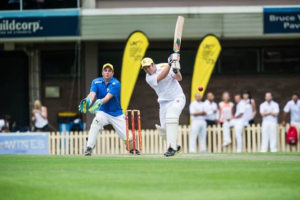 All will be decided on the pitch tomorrow with the return of The Big Clash; the game that sees rival agency stars and publisher legends go head-to-head for the title in a special 20/20 charity cricket match for industry foundation UnLtd.

Last year the contest was taken out by the media owners, but this year it could be anyone’s game.

Players have been engaging in a bit of pre-match banter, speculating on who will take the trophy. PHD Group Australia CEO PHD Mark Coad is the captain of the agency team this year, saying his team have upped their game this year.

“Last year we turned up with an esky and a plastic bat – and still gave them a run for their money. Imagine what we’ll do to them now we’re taking it seriously! All good fun, and for a great cause,” says Coad.

Astus managing director, Tom Bartlam, said: ““The agency team have had a long hard look at themselves so hopefully we will make it more of a contest this year….you never know we might even turn the tables!”

AdNews editor Rosie Baker will be umpiring the event, alongside Mumbrella's Alex Hayes. Bohemia's Brett Dawson has called for higher standards of umpiring this year, so both umpires better brush up on their cricket knowledge.

Pandora commercial director, Chris Freel, knows how important this competition is to not only the egos of media execs, but the charity, saying: “It's not about the winning, the real satisfaction is raising money for a great cause and the opportunity to unite publishers and agencies and have lots of fun doing so.”

This year UnLtd is aiming to reach $40,000 for Desert Pea Media, an UnLtd charity which uses hip hop and documentary projects, to allow at-risk young people to explore complex cultural and social issues. You can donate here.

Who do you think will win the match? Tell us in the comments below.

Check out the teams below: