MEAA calls for Nine and Fairfax merger to be blocked 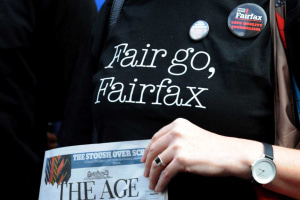 The Media, Entertainment & Arts Alliance (MEAA) is calling on the Australian Competition and Consumer Commission (ACCC) to block the merger between Fairfax and Nine as it will be "bad for Australian democracy" and media diversity.

MEAA president Marcus Strom says the "takeover" announcement, which sees the Fairfax name axed and Nine CEO Hugh Marks take the helm of the new entity, is the result of Coalition’s Government’s "short-sighted" and "ill-conceived changes" to media ownership laws.

He believes these changes, announced last October, were "always going to result in less media diversity".

The ACCC has confirmed it will commence a public review of the proposed merger, once it has received submissions and relevant information from Fairfax and Nine.

Strom also calls for Nine and Fairfax to explain how they intend to defend the integrity of independent quality journalism in any combined entity and support the the Fairfax Charter of Editorial Independence.

Speaking on an investor call today, Nine CEO Hugh Marks said the board of Nine Entertainment Company is "more than happy to adopt the principles of the Fairfax independence charter".

MEAA will demand that all existing employment conditions and entitlements are protected and retained for all workers at both companies; and that existing industrial agreements are respected.

“Any further cuts to editorial journalism at Nine and Fairfax would bite into the muscle, bone and soul of the newsroom. The proposed savings of $50m in two years should come from trimmings to bloated executive salaries and from any back-office rationalisation," Strom says.

Staff have been shaken by the news the Fairfax name will be dropped and are openly hostile about the announcement.

A memo from Marks reassured staff the merger wasn’t done on the basis of cost-cutting. Instead, it will create a strong future for both businesses. He did, however, address the possibility of redundancies.

MEAA will be urgently convening meetings of its members at all Fairfax Media newsrooms to discuss the impact of today’s announcement.