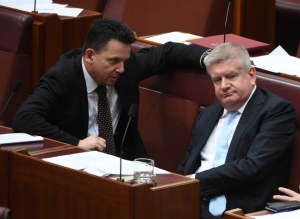 The biggest reform to Australian media laws in 30 years have passed the House of Representatives and will become law.
The Government says its reforms package will strengthen Australian media organisations' ability to compete with global tech giants and allow organisations to consolidate, ensuring local media companies remain viable.

Redundant rules that date back to pre-internet 1980s will be abolished, such as the cross-media ownership barriers and reach restrictions to 75% of the population.

Labor, which has opposed the the reforms for much of the process, forcing the government to make several concession Senate crossbenchers, including Pauline Hanson's One Nation Party, performed a backflip yesterday with shadow communications minister Michelle Rowland saying Labor would not oppose the amendments to local programming requirements.

Communication minister Mitch Fifield, the driving force behind a reforms package that looked unlikely to pass at one stage, took a swipe at Labor before in a sharply worded press statement.

“I thank Coalition colleagues for their strong advocacy and support of these vital reforms, and the leaders of Australia's media industry for coming together to back the package with one voice. I also acknowledge the constructive engagement of the Senate crossbench,” Fifield said.

“But it should not be forgotten that Bill Shorten and Michelle Rowland, when given a chance to engage with the Government on an important and comprehensive piece of economic reform, were once again more interested in playing petty politics.”

The media reform package measures include:

The abolition of broadcast licence fees and replacement with a more modest spectrum charge, providing close to $90 million per annum in ongoing financial relief to metropolitan and regional television and radio broadcasters.

A substantial reduction in gambling advertising during live sport broadcasts, representing a strong community dividend with the establishment of a clear 'safe zone' for families to enjoy live sport.

Abolition of redundant ownership rules that shackle local media companies and inhibit their ability to achieve the scale necessary to compete with foreign tech giants.

Following an agreement with former senator Nick Xenophon, the Government will implement a $60 million regional and small publishers jobs and innovation package including:

Following an agreement with senator Pauline Hanson, the bill will also give effect to: