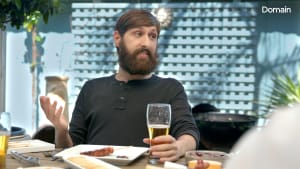 Melbourne has been personified as a coffee-loving, bearded hipster, of course.

Domain has teamed up with home loan lender ME Bank for a branded content series that takes a peek inside the often daunting world of Australian property.

The series, called States BBQs, centres on the current challenges of the property market, such as house prices, investing and commuting.

In the first episode viewers are introduced to the Bali-loving resident of Perth, the tight-budgeted Sydney local, the bearded Melbourne hipster, the beer drinking Queenslander and the forgotten Tasmanians.

So far the videos, distributed on Facebook, have been seen by more than 190,000 views on the Domain site and across social since its launch.

“ME’s brief challenged us to think creatively, specifically asking for a big idea that would break new ground and challenge convention,” she says.

“When we started streaming live auctions on Facebook, we were able to witness in real time the sentiment of Australians in different states towards the current property market. Capturing that sentiment and turning it into a humorous video series was the perfect way of bringing ME's cheeky and charming brand persona to life.”

Domain first began producing its own content series with the launch of Avalon Now, parodying the foibles of life on the northern beaches.

This is the first content series that Domain has worked on that tie-up with a brand.

ME head of home loans Patrick Nolan says ME’s content sponsorship with Domain was a great way to increase awareness of the challenger bank’s digital focus.

“Our brand steps aside the conventional and engages on issues that everyone is talking about, so Domain’s new BBQ series was naturally a perfect fit,” he says.

The six-part episode series was written by Domain and produced by Engine Room Productions.

Engine Room lead creative Damien Cassar said: “What better way to talk about the current state of the Australian property market than having an unofficial COAG over snags?”