McCafé, VW, Domain, CUB and more back The Block 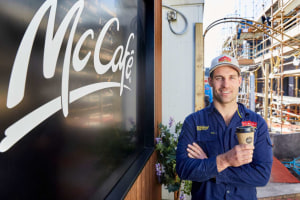 McCafé on The Block

The sponsors for Nine's 2017 season of The Block have been named, with McCafé, Domain, Mitre 10 and Stayz returning to the show.

The Block has also received new sponsorship from a slew of big brands, including Volkswagen, Carlton & United Breweries, health food delivery Youfoodz and vitamin company Centrum. However, the reno program has lost Aldi and Telstra as partners.

Speaking to AdNews, Nine group content strategy director Lizzie Young says the network is thrilled with the amount of sponsorship for the season.

“We have more brands than ever before. If you count all partners and sponsors we have over 27 brands,” Young says.

Each will integrate in a different way. McCafé is returning with a pop-up café on the construction site, Stayz will be rewarding the Blockheads with the winning room each week with weekly Getaways and Domain will offer property advice for contestants.

Speaking on each brand, Young says the continued support from Domain “is one of the best fits you could dream for when it comes to reality television”.

As well as Domain, McCafé will be producing a digital series on 9Now with interviews from the pop-up cafe on site.

Volkswagen will be joining as the official automotive partner and will be supplying contestants with Volkswagen Tiguans.

As a new partner, Youfoodz will be feeding contestants with chef-prepared meals every week as well as running a consumer promotion to give away a year’s worth of Youfoodz.

Newcomer Centrum joins The Block as the 2017 multivitamin partner with branding integrated within the show in challenges and across the series, including a bespoke digital content series.

Young says the continual success of The Block can be pinned down to the show's ability to reinvent itself.

“The excitement for this season is on a another level because they’re working on houses. The great Aussie dream of owning your own apartment continues to be an absolute passion for million of Australians that’s why the block continues to deliver and be a success and why it's so relevant for brands to connect with consumers,” Young says.

The show has been on air since 2003, and for Young, there’s always the question of 'how do you do more to expand our audience footprint?'.

“The things clients are asking for is consistency, large scale audiences day-in-day-out across as many platforms as possible... [for The Block] we are using specific campaigns that targets on their messaging,” she says.

“brands are befitting from greater audience coverage and through campaigns.”