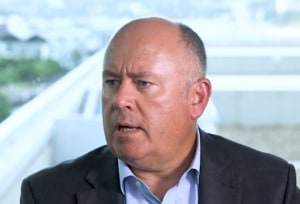 Foxtel CMO Andy Lark has labelled Facebook's treatment of users “appalling” and urged marketers to question whether they should invest in the social media platform in the wake of the Cambridge Analytica scandal.

Lark, a former CommBank CMO who helped lead the bank's digital transformation, is the most senior marketer in this country to publicly criticise Facebook after it emerged Cambridge Analytica obtained the data to millions of Facebook users to manipulate the 2016 US election.

Speaking to Paul McIntyre, editor at large for Foxtel's ad sales house MCN, Lark said the scandal has a number of major implications for marketers.

“The second thing it causes you to do as a marketer is go, 'should I be sponsoring or investing in parties that behave this way'? Elon Musk doesn't think so.”

“But for larger scale marketers,” he added. “You have the right to stand up and go, 'clean up your act, this is not ok'. I think we have a bigger role to educate consumers about when they log-in to Facebook, what data are they giving away and who has access to that data.”

Facebook has consistently pointed out that it never allowed developers to on-sell data and that a Cambridge University academic Aleksandr Kogan breached Facebook's privacy rules when passing on app data to Cambridge Analytica. In a globall press call last week which AdNews was invited to join, global CEO Mark Zuckerberg admitted mistakes were made and said he would take legal action against the data company if required.

At the recent Starcom Media Futures event, Facebook ANZ managing director William Easton apologised to a room full of marketers for “failing to meet user expectations”, a sentiment that has been echoed by Zuckerberg at a US Senate hearing today.

Easton said that advertisers had been largely supportive of Facebook in the wake of the scandal. Zuckerberg also said there had been no 'meaningful impact' on advertisers.

Lark's personal view on Facebook has cooled recently because he believes the platform has become “incredibly expensive” and incredibly hard to reach and audience”.

He also believes there is a group of influential CMOs who are “thinking the issue through”, but on the other side there is a “big bunch of digital marketers” who would “rather go with the flow”.

“The other thing that is happening is that media as a whole is getting better and better and marketing attribution models are maturing faster and faster,” he added.

“So we are actually all becoming far more astute at understanding it's ultimately all about the mix and marketers understanding that they can dial down Facebook or Google because they understand the effectiveness.”

'They're a media company'

At the centre of the scandal is the role of Facebook in society and how regulators should treat the social media platform that has long resisted calls it should be subject to media regulation.

To further elaborate the point, Lark questioned what would happen if any major newspaper allowed any organisation to run whatever ads it liked and if there was a section that allowed anybody to voice whatever opinions they wanted.

“We might even have a harassment column where we can pick someone like Steve Smith, who might have annoyed us this week – we're just going to go to town on him and you can write anything you want uncensored because we're a platform and we want to make the world a better place and we're about democracy and freedom,” Lark added.

“If any publisher did that it would game over.”

The Foxtel CMO said tech companies need to take a level of responsibility for policing bad actors on the platform.

“If you have an algorithm that can predict someone else's political preferences and sell that algorithm to somebody else ... you certainly have intelligence and super powers to get rid of all of the bad actors, prevent governments from being manipulated and people being manipulated unfairly,” he adds.