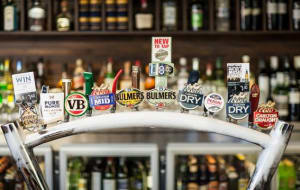 Marketers need to over-invest in marketing to give their brands any chance of success, according to Richard Oppy, recently appointed marketing director of Carlton & United Breweries.

Oppy, who was confirmed last week as the permanent marketing boss after talking on the role as an
interim position last year, outlined his strategy for halting the decline of the beer category with investment in brands, marketing and innovation.

The brewer plans a $7 million campaign to support the national roll-out of beer brand Great Northern, a brand it launched in Queensland four years ago to take on XXXX – the state’s traditional beer of choice.

Positioned as an aspirational beer, with brand communications based around the idea of escaping to the great outdoors, Great Northern is now the fastest-growing beer brand in the state and Oppy sees similar success nationally.

Neilsen puts CUB’s main media pend at about $16 million, and the $7 million investment is at the “top end” of what CUB would normally invest in a new launch, but Oppy is upbeat.

“What we’re looking at is what the big bets in our portfolio are, those that play to those growth segments. I’m a big fan of being bold with launches and innovation and over-investing in the early days to grow awareness of those brands and give them every chance of success,” he said.

“In the early days it’s about getting as much trial as possible, because we have to back the quality of our product. And there’s no better way to build a brand than to get the brand in hand and liquid on lips.

So we’ll over-invest in trial in early stages, then when it comes to later in the year we’ll tailor our message to connect with people when they are feeling like they’re ready to escape and relax,” he said.

CUB, alongside other brewers, is fighting an uphill battle. The alcohol and beer markets are in decline as people drink less. So its focus is on making sure it has the right products and brands where there is potential for growth.

“It is a difficult time in beer. The biggest challenge is how we turn that around, and play in as many
different consumer needs and occasions, and make sure there is a brand in our portfolio appropriate
for all of those.”

Great Northern is one of a handful of brands CUB is focusing its energy on. Oppy told AdNews that while the category is unlikely to return to growth any time soon, he is “optimistic” that the innovations and investments CUB has coming down the line will halt the decline.

The brewer is also plotting its biggest cross-brand promotion in more than a decade to coincide
with the footy season. The footy rewards campaign, which kicks off next month, will run across cases of beer and cider in the brand portfolio, including Strongbow and Carlton Dry, offering access to footy games and events such as The Brownlow Cup or the Grand Final. It will run throughout the NRL and AFL seasons.

As part of CUB’s effort to reverse declining sales, Oppy has also overhauled the way the brewer works with retail partners, focussing on tailoring its in-store marketing for each retailer rather than a blanket promotion. It gives each retail partner a point of difference and better meets their objectives.

For instance, Wesfarmers might want to drive shoppers from the grocery store (Coles) to the liquor store(Liquorland), so CUB will work with them on a mechanic to help do that.

“[Retailers] are the gateway to our shoppers and we need to think about how we can better meet their needs and make sure our brands are best represented in their stores so that they make more money and so do we,” he said.