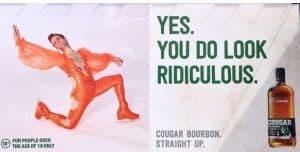 Alcohol ads from both sides of the spectrum have been cleared of any wrong doing by the Ad Standards Bureau, with the ASB clearing Alcoholics Anonymous of sexism and Carlton and United Breweries of homophobia.

The Alcoholics Anonymous ad in question features a women waking up next to an empty bottle of wine, as a man gets dressed and leaves her alone in her bedroom. The ad then asks if your drinking is something to be ashamed of, followed by a prompt to go to the AA website.

Those who complained about the ad took offence to the question of responsibility being put solely on the woman.

“The ad is sexist. It suggests that a woman's sexuality is something that women should feel shame over. The male in the ad was not treated as though his actions were wrong, yet the woman was made out to have committed an act that is wrong and shameful.

“This was made clear by displaying a caption that said "does your drinking make you feel shame" whilst the camera focused on the woman. It is misogynistic, sexist, and perpetuates the idea that a woman's sexuality is somehow inherently wrong. Completely offensive and inappropriate,” wrote one complainant.

The advertiser said that: “The advertisement does not ask the viewer to pass judgement on either the man or woman in the depicted scenario. The question ‘Does your drinking cause you shame?’ is on screen at a point when the young woman is clearly considering her own response to the situation, not the man’s or anyone else’s.”

The ASB agreed, dismissing the complaints.

Carlton and United Breweries was also in the firing line this month over a billboard that some believed was homophobic.

The billboard shows a man in an orange Lycra costume complete with billowing sleeves, metallic spots and fabric cut outs. The accompanying caption on the billboard said: “Yes. You do look ridiculous” and in smaller font underneath: “Cougar Bourbon. Straight Up”.

Another agreed: “ This ad is appallingly homophobic, and sanctions homophobic attitudes and discrimination by reducing homosexual men to objects of ridicule for 'real', i.e. 'not ridiculous' straight men. It is incredibly offensive and a gross misuse of the power that advertising has to influence social attitudes. I am incredibly disappointed that this was allowed into the public sphere.”

Carlton and United Breweries said that it was never its intention for the ad to cause offence.

“We don’t think this image represents a definitive ‘gay look’ and nor was it intended to. For your background, the male talent was not cast to look stereotypically gay. Furthermore the tagline “Cougar Straight Up” is featured on all the outdoor creative (and is a talking point in the radio campaign too) and is intended to communicate the brand personality of a humorous straight shooter (without being offensive).”

The ABS agreed, citing that the term “Straight Up” was not intended to offend.