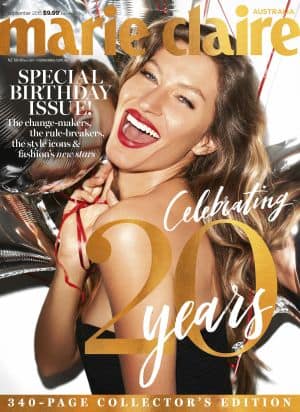 To celebrate two decades in Australia, Pacific Magazine's title marie claire, will get personal with the title putting its loyal subscribers on the cover of the fashion magazine.

Subscribers, advertisers and key influencers will receive a personalised copy of 20th anniversary collector’s edition with their name printed on the cover.

In order to celebrate the birthday, the title will commence a large marketing push consisting of TV ads and billboards on Channel Seven, print ads in various publications and will roll out a digital outdoor campaign to promote the issue.

At a retail level, "premium positioning" has been secured in all outlets. There will also be integrated exposure across the Yahoo!7 network with a focus on engaging the social media audience through video content.

Airing on 23 August, the program will include interviews with some of Australia’s best-known stars and iconic fashion identities, including Jennifer Hawkins, Megan Gale, Dannii Minogue, Jessica Mauboy and Alex Perry.

Founding editor and publisher Jackie Frank said: “Women’s stories and the world of fashion have been my passions for as long as I can remember, and it’s been my privilege to be the voice of championing women’s issues for more than two decades. It’s been especially exciting seeing the brand evolve from a magazine into a content powerhouse across multiple platforms.

“From this edition, I hand over the editor’s position to Nicky Briger who has been part of the marie claire family from the start, and together we’ll make an unstoppable team.”

To tie into the push Pacific Magazines has also created a bespoke The Parcel in homage to marie claire’s 20th anniversary.

“We have received fantastic advertiser support across all of our media channels to celebrate the 20th anniversary,” says Anne-Marie Cheney, group sales director, marie claire. “

Both marie claire’s longstanding clients and our newer client base understand the power of the marie claire brand and the halo effect that an anniversary issue presents. We are excited to celebrate this milestone with our clients and have worked on a number of bespoke campaigns designed specifically to take advantage of the noise around the anniversary.”