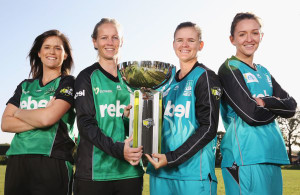 Mamamia has signed a deal with Cricket Australia that gives the publisher rights to stream the Women's Big Bash League (WBBL).

Mamamia will carry a live stream and a highlights package of all 47 of this season’s matches complementing the 12 games broadcast on Network Ten.

The partnership aims to build on the success of the first two seasons of the WBBL and expose more people to the game.

In addition to match coverage, the deal will see Mamamia working with Cricket Australia to create content to inspire women and girls to be involved in all aspects of the game, celebrate WBBL players as role models on and off the field, and help to establish cricket as a real career choice for women.

Cricket Australia head of digital Finn Bradshaw believes the partnership will ensure that cricket is continuing to lead the way in terms of coverage of women’s sport in Australia.

“I’m very excited about this partnership and the impact it will have on the WBBL. By combining the talents of two of Australia’s most popular and innovative media brands – Cricket Australia Digital and Mamamia - we can take the WBBL to an even bigger audience than ever and inspire women of all ages and around the country to get involved with the sport," he says.

Mamamia announced its intent to move into sport content at the end of last year, launching a dedicated vertical on its homepage.

“Mamamia are extraordinarily proud to be partnering with Cricket Australia to bring WBBL to live stream all 47 games across the Mamamia digital ecosystem, the number one digital platform for Australian women. The access to live stream WBBL games on Mamamia adds to the serendipitous context mix that engages more than 18 million women globally each month," says Mamamia head of marketing and product Tegan Gilchrist.

Cricket Australia recently appointed former PepsiCo sports marketer Kim McConnie to head of the Big Bash. The move follows Anthony Everard being promoted to executive general manager of leagues and events. McConnie had been with PepsiCo for 14 years, working across its sports marketing strategy for professional leagues, teams and athlete relationships.