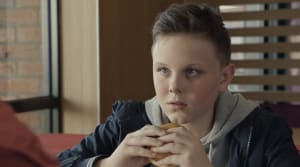 McDonald's UK has been forced to remove and apologise an overly-emotional Filet-o-Fish spot. The ad shows a boy continually questioning his mother about his late father, whom is nothing like him, however the boy finds solace in their shared love of the McDonald's fish burger.

The ad, from Leo Burnett London, was supposed to run for several weeks but was swiftly taken down by the fastfood chain after receiving a series of complaints that labelled if “offensive” and “trashy beyond belief”.

According to Adweek, a McDonald's spokesperson had apologised for the ad and confirmed the company's decision to withdraw it in a statement.

“The advert will be removed from all media, including TV and cinema, completely and permanently this week,” it said.

“It was never our intention to cause any upset.”

“We are particularly sorry that the advert may have disappointed those people who are most important to us our customers. Due to the lead times required by some broadcasters, the last advert will air tomorrow, Wednesday 17 May. We will also review our creative process to ensure this situation never occurs again.”

Unsurprisingly, online communities were quick to throw their hands up and demand it be pulled.

Not all feedback was negative, some Twitter users defended the poignant ad:

Fuss about nothing. If a harmless meal gets people talking about death, good. I have just watched the ad - it was excellent! #McDonalds

I thought the #mcdonalds advert was quite well done. Some people just enjoy being perpetually and professionally offended.

The ad follows a series of big brands releasing creative that misses the mark in particularly bad taste including the notorious Kendall Jenner Pepsi ad and Nivea's “White is Purity” posters.

Check out the ad below: