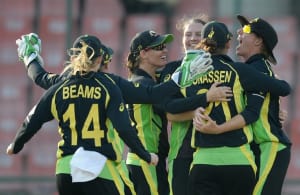 Lion's XXXX Gold brand will become the official beer of the Australian cricket team after signing a four-year deal as gold partner of Cricket Australia.

Lion replaces Carlton United Breweries and its Victoria Bitter brand, which announced over the weekend it would pull out of cricket sponsorship.

The sponsorship package will see XXXX Gold beers stocked at all Cricket Australia official functions, along with designated signage at stadiums. The partnership does not include any branding of player clothing.

“Lion is one of Australia’s largest food and beverage companies, with quality products and a well-deserved reputation for corporate responsibility," he says.

"XXXX Gold is the number one mid-strength beer in the country and will be a great moderation choice for fans attending our games. Lion and Cricket Australia both have a relationship with DrinkWise Australia and we look forward to working collaboratively to promote a positive drinking culture at games, where fans never miss a moment of the action."

“Mid-strength beers are a popular fixture in stadiums and other venues around the country and we are proud to bring the number one mid-strength in the country, XXXX Gold, to cricket fans to enjoy responsibly," he says.

"Lion has invested for decades in mid-strength beers, which provide consumers with credible options to moderate consumption. Today one in four beers consumed in Australia are lower than full strength."

Under a restructure of CA’s commercial partnerships, announced at the start of the summer, naming rights sponsorship for the men’s international team, including all test series and one-dayers and T20, are being negotiated separately.

Discussions for all three are "well advanced" and will be announced as they are concluded.

CUB pulled out of cricket sponsorship after 20 years. Sponsoring the Australian cricket team is widely regarded in sports sponsorship circles as one of the premier properties to back.

VB has lent itself to some iconic ads and promotions, including the famous Talking Boony of 2005 by GPYR - one of the greatest product endorsments to grace the gentleman's game.

Then there was this absolute pearler starring Warnie in 2017 that few cricket tragics will ever be able to forget.

Although the brewer will continue its backing of AFL and the NRL, which have both just kicked off their seasons, it has been reported that commercial reasons are behind the decision to pull stumps on cricket.