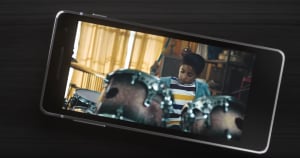 Leo Burnett Sydney is behind the latest global work for Samsung promoting the release of its Samsung Galaxy S8.

The fast paced ad plays on Samsung’s latest device, featuring a multicultural cast of kids playing football on the street, people dancing in a club and a young girl boxing in a gym.

Leo Burnett CEO Peter Bosilkovski took to LinkedIn to share the ad and thank his team for the work.

“It's not every day you get to create a global commercial from Sydney, Australia. The commercial helped launch the Samsung Galaxy S8 in New York last week.”

The spot promotes the phone's "infinity display" feature, which means the screen covers the majority of the front of the device, with very little body on the top and bottom of the screen not dedicated to the display.

The Samsung Galaxy S8 has been teased by the tech company for months, marking the end of the challenging era for the brand after last year’s Note 7 had a global recall after several handsets exploded.

This isn’t the first time Leo Burnett Sydney has helped produce global work for Samsung, with its Olympic spot, ‘The Anthem’, being created by the agency along with Leo Burnett Chicago.