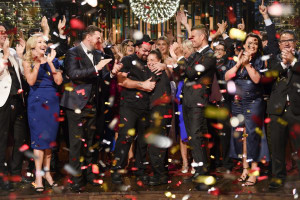 As with previous years, the show was split into two separate programs, first the 'grand final' and then the 'winner announced' episode.

The grand final brought in 1.36 million viewers, which was down 30,000 viewers compared to last year's final.

Despite the ratings win, Seven's tent pole show had a decline in viewers across the season with the 2018 metro average of 1.102 million viewers down 7% compared to the 2017 season (1.184 million).

In fact, the 2018 season average was its lowest to date, although some of this drop off is due to the strong performance of Married At First Sight in the earlier weeks.

Going up against the MKR Grand Final, The Voice began it first knockout round overnight, drawing in an audience of just over one million viewers.

Ten was again missing from the top 10 shows, as it awaits the return of its tent-pole show MasterChef, premiering tonight in the 7.30pm slot.

Other partners for 2018 include Ardmona, Canstar, SATC and Swisse Wellness.

Below is a table of the top 20 TV shows, provided by audience measuring company OzTam.

Below is a breakdown of last week's TV ratings performances, supplied by Nine, covering all the key demos in the commercial share.