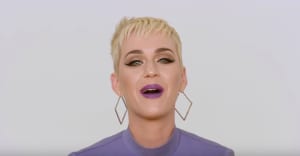 Katy Perry has been slammed for a Myer ad

The retail giant was left red-faced when viewers took offence to the singer encouraging pet dog Nugget to “chase some koalas”.

Animal lovers have branded the ad “disgusting” with vets challenging Perry to to come and see the koalas impacted by dog attacks.

A spokesman for Myer said: “We are aware of comments in relation to Katy Perry’s Witness: The tour advertisement and a particular reference made to koalas. We are currently removing the material which references koalas.”

The original ad shows Perry telling viewers they can go into a draw to win one of 8000 free tickets to her show, ending on the line: “Let’s go chase some koalas, Nugget!”

It's likely Myer won't pull the entire campaign, rather take out the statement about koalas.

The news comes only days after it was reported that Perry was pictured at Sydney airport while her 'live' performance was being broadcast around the country.

This is not the first time a big brand has been embroiled in controversy. This week, Dove's "severely misguided" breastfeeding campaign came under fire. Earlier this year, Nivea was also forced to pull a "racially insensitive" ad that featured the tagline "white is purity".