King Kyle returns to the airwaves on Kiis 1065, media minders in tow 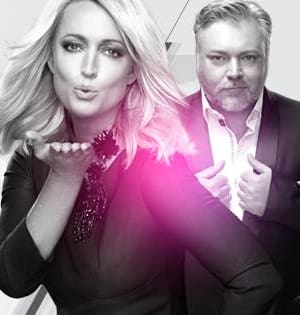 ARN chief Ciaran Davis says Kyle and Jackie O's show at Kiis 1065 will be "fun, cheeky and polarising", but brands can rest easy – the 30-second delay and media censor have also made the move.

The rebranded Mix 106.5 launched today with the former 2DayFM duo at the helm of their flagship breakfast show. Sandilands said it was "the same show with a few little tweaks and adjustments".

He predicted a return to the number one spot by either the first or second radio survey. "With the audience that Mix had and the audience we're going to steal from 2Day, it'll be number one pretty quickly," he said.

On the public sledging between the pair and their former employers, he added: "Radio more than TV we're fierce rivals. It feels like we've got rid of one girlfriend and we're dating a new one, and she's hot and sexy and she's down for it."

Davis told AdNews he "wouldn't have brought them on if we didn't think they could be number one". "We want to be able to offer our advertisers the number one and number two breakfast show in Sydney, and with Kyle and Jackie and Jonesy and Amanda on WSFM, that's what our year is geared up for in terms of investment," he said.

"It's important to remember that the controversial issues, that perception that the show has, the last one was two years ago. We've employed the 30-second delay, we have a media censor in there as well who can automatically dump, so all the precautions that were in place [at 2DayFM], that we weren't obliged to put in place, we've brought them in as well."

He said the goal was to explain to advertisers that it wasn't an 18 to 25-focused station out to "cause shock with controversial comments" like some of the younger brands. "The brand is fun, it's cheeky, and sometimes to have that you have to have polarising personalities – but that's why people love them, that's why people like the show."

"But it's interesting that 2DayFM have dropped the engagement with those 200,000 and started their own Facebook page. We just have to see if Facebook say that 200,000 can migrate over, but if not we're confident we can build it back up. Plus we've got all our Twitter followers, the app that launched 11 hours ago is already number five on the app store, so the issue about our social engagement that's been raised is nonsense."

The radio duo resigned from Southern Cross Austereo in November amid rumours of a contract dispute, prompting public sledging between Sandilands and his former employers, and Merrick Watts, co-host of 2DayFM's replacement breakfast show alongside Jules Lund, Mel B and Sophie Monk.

Sandilands famously drew the ire of social media following comments he made about a News Limited journalist, leading to an advertiser boycott off the back of public pressure from petition website Change.org.