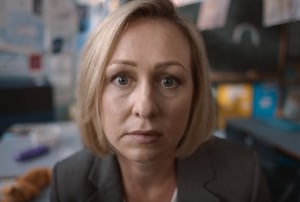 A still from the KFC ad under question

A KFC ad featuring a child’s drawing of two parents “naked wrestling” faces being banned by the ad watchdog, following a raft of complaints.

The ad, which tells the story of a mum and dad being asked about the drawing in a parent-teacher interview, is under investigation by the Advertising Standards Bureau (ASB) after 30 complaints were made about its sexual content.

But the ad, created by Ogilvy as part of fast food outlet's summer ad campaign, has since been altered to show a drawing of daddy's "fart trumpet".

Complaints were made on the basis of sexualisation with a number of parents concerned it was overly suggestive.

KFC CMO Angela Richards defended the ad, saying it did not breach any code of ethics.

"KFC has strict review and approval processes in place to ensure all creative work adhere to relevant codes and standards," she said in a statement.

These complaints are now being dealt with through the complaint process, which considers if an ad has breached the ASB code.

After the ad and the complaints are assessed, a determination will be made to either uphold or dismiss the case.