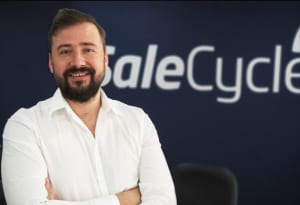 How would you describe what the company does?

Designing, implementing and triggering segmented and personalised on-brand website overlays and messages at the exact moment our proprietary platform detects a customer is about to exit any sign-up forms, subscriptions or e-commerce carts.

What does your role involve?

I have regional P&L responsibility for existing Australian, Singaporean and Hong Kong country teams with a remit to expand our APAC revenue and headcount.

Most people would put “growth” here right? Well I’m not most people and personally I am excited that the media and industry as a whole is recognising us for what we do, in fact Business Insider just listed SaleCycle as the number one best UK tech company to work for. Not only that, but we have solved a major pain point that has arisen from programmable media and content marketing automation. We are enabling advertisers and agencies to optimise the channel (of visitors) that now exists on their ‘owned’ media that need to be converted or nurtured.

As a world first we have now introduced personalised SMS Remarketing, to complement our existing personalised email remarketing and on-site remarketing platforms. The first SMS remarketing campaign for Malaysian Airlines’ budget carrier, Firefly has already won key industry awards in the UK beating Starbucks and Jaguar. Finally, it’s very exciting that we have now opened offices in Hong Kong and Australia and have expanded our teams in both locations.

You can be part of creating and imagining concepts that change the industry itself. With eMitch we changed how media was planned/bought online in Australia. With TagMan, we were key to creating a new market called Tag Management globally. I see SaleCycle as creating a new channel that both agencies and advertisers can optimise successfully as part of their mix, while the lines between data-driven content and media become more blurred.

My first boss in digital and still a friend and mentor was Rob Norman in London when there were just a handful of us at Outrider (WPP) in 1998. I was then an original team-member of ASX-listed eMitch in Australia (acquired by Aegis). I launched the US business for TagMan in New York and then became APAC Regional Director for Ensighten Inc as part of the takeover. I’m also the co-founder for Digital Ministry (that AU/NZ digital media LinkedIn group with 22,000 members that you are most likely one of).

I was a Cleo Bachelor back in the day.

Don’t be shy (be a Cleo Bachelor).

Somewhere cost effective, fast and that has somewhere to charge my phone.

Not shown to me as a banner ad, at a frequency of 50, for one month after I have bought the product.
I really love this 30 second TV spot “Life is a beautiful sport” from Lacoste.

“Voice Search” on the new Apple TV‘s remote has changed my patience dramatically.

Streaming and On Demand has changed my entertainment options significantly, especially while travelling.

It was an audio book. Winning by (ex) GE Chairman, Jack Welch. My partner’s daughter had to suffer through it during our Sydney/Tasmania road trip – but the bite-sized chapters are worth the time to absorb when you have a few minutes spare.

It is a small world and an even smaller industry.

I got into advertising/ad tech/marketing because:

The timing was amazing. For my first job, working in David Kyffin’s small direct response team at TMB Direct in London, I lied about being great at Excel. This was a problem given I was supposed to be overlaying phone calls with TV/Radio DR ad-spots to analyse the cost per call. The fact that the internet just ‘happened’ at that time and with my experience on Direct Response - I fell in love with the tracking aspect of it all and how to optimise everything - before ad-servers.

If I wasn’t doing this for a living, I’d be:

In five years’ time I’ll be:

I really want to launch a Hot Sauce brand. No lie. Ask Noah in NYC who runs http://heatonist.com about my fermented batch called “Chinese Thunder”.

Define your job in one word.