I'm A Celebrity Get Me Out Of Here was the top rating program outside news with an average metro audience of 891,000 viewers. It topped ratings for 25 to 54-year-olds and under 55s, and is up 28% on last year's episode five.

In last night's episode of I'm A Celeb, Shane Warne opened up about some of the difficulties he faced in his recent relationship with Liz Hurley.

The legendary legspinner says he would have to fall head over heels with someone to consider having more children.

“The only way I could do it, is if I absolutely fell for someone head over heels, if I was desperate for them, and if they said ‘I really want kids’, then I would consider it.” 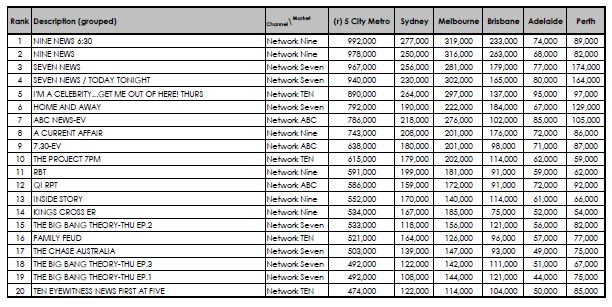 Data © OzTAM Pty Limited 2016. The Data may not be reproduced, published or communicated (electronically or in hard copy) in whole or in part, without the prior written consent of OzTAM. Program performance and ranking information subject to change when not based on final program logs