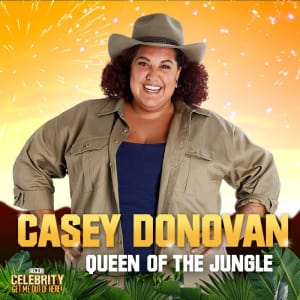 Casey Donovan is the first woman to win I'm a Celebrity

More than a million people tuned in to the finale of I’m A Celebrity...Get Me Out Of Here to watch Australian Idol winner Casey Donovan become the first Queen of the Jungle.

The Ten program pulled an average metro audience of 1.056 million, but was still beaten by Nine’s Married at First Sight, which attracted an audience of 1.060 million.

For the second consecutive night, Seven's My Kitchen Rules fell below one million city viewers (968,000), the second lowest in the show's history.

Our new jungle Queen @CaseyDonovan has a very special message to everyone who voted for her 😘 #ImACelebrityAU pic.twitter.com/wGDcMmNYdM

I'm a Celebrity and Married at First Sight dominated in the top two slots across all key advertising demographics.

“After increasing its television audience 6% last year, I’m A Celebrity…Get Me Out Of Here! has achieved even stronger growth of 9% on television this year and recorded extraordinary increases online and on social media.

“The series is a true multi-platform success, engaging with Australians across every screen and creating conversations and headlines every time it goes to air."